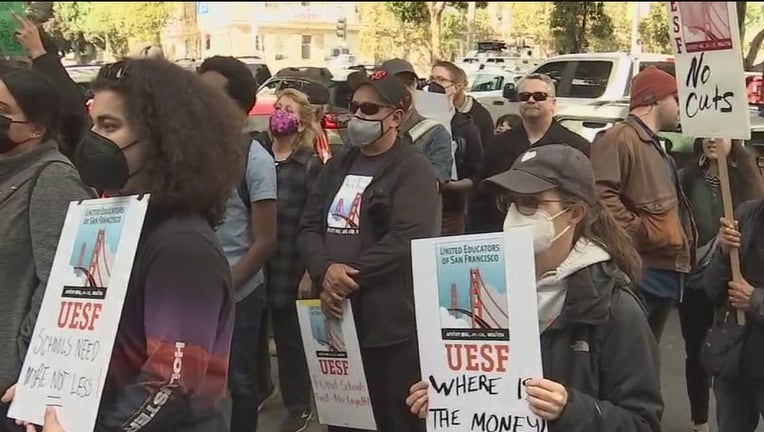 SAN FRANCISCO - San Francisco's public schools teachers gathered at the district headquarters on Monday, outraged that some of the city's educators aren't receiving their paychecks.

The teachers say this all started with a new payroll system the district started using earlier this year. Those teachers say that system has been glitchy, and those glitches mean hundreds maybe more than a thousand educators aren't getting paid what they should and in some cases, not getting paid at all.

San Francisco public school educators rallied at district headquarters, saying problems with the new payroll system for the district has left many without a paycheck.

Nathalie Hrizi Is a teacher and librarian and says her pay was delayed because she's currently on leave working at the union office. She says it all started at the end of January with about 18 substitute teachers who complained they hadn't received their paychecks.

"We sent out surveys to the substitutes and other educators and realized the magnitude of the problem was much greater than 20 substitutes and it's really up in the hundreds potentially thousands," said Hrizi.

United Educators of San Francisco and the district say the new system seems to have problems recognizing those who work multiple jobs in the district or who are on leave for one reason or another. Some of those employees are not receiving their benefits, getting paid their full salary and in some cases, aren't getting a check at all.

"So I have two women that I'm trying to work with, still trying to get paid, this is weeks and weeks, who have newborn infants at home who have not been paid thousands of dollars that they are owed," said Hrizi.

The district released a statement saying the new system replaces an outdated platform that had been used for 17 years. Adding that the majority of employees received their regular paychecks, but acknowledging that hundreds did not.

"Staff are working to investigate and remedy each individual issue of non-payment or underpayment and to identify any error patterns caused by a new process or system configuration so that corrections are made for subsequent pay periods."

The union recognizes that the district has been trying to resolve the issue, but says more needs to be done. "They have to really step up and make sure that everyone gets paid and then the other thing is they have to fix the system. This cannot happen again," said Hrizi.

Union members say staffing shortages in the payroll department have compounded the problem.

Superintendent Vincent Matthews has said the glitch is inexcusable and has tasked the districts chief technology officer to dedicate their time to work on this payroll issue until it is resolved.