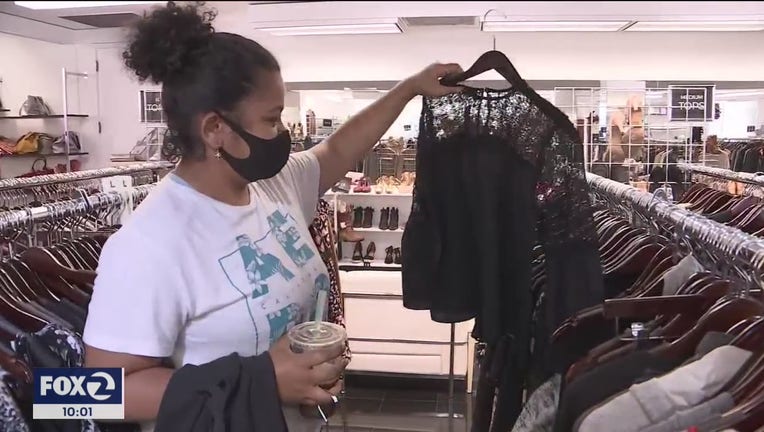 Michael Bryant has no intention of closing his thrift stores, even as the citations pile up.&nbsp;Debora Villalon reports

Michael Bryant has no intention of closing his thrift stores, even as the citations pile up.

"I'm not stopping halfway, I either shouldn't have done it or I'm going all the way with whatever it takes," Bryant told KTVU on Wednesday.

He and wife Dana are the founders of Crossing the Jordan, which provides programs for people recovering from substance abuse, homelessness, sex trafficking, and incarceration.

The services are funded by five second-hand stores, which closed abruptly in March, under state and local emergency orders.

"We're were like, we're going to lose these people we're caring for, they're going to go out to the streets, what do we do,?" said Michael.

The 18-month residential program has more than 100 residents, including some adults with children.

Years ago, the Bryants beat addiction themselves.

"In our 20s, that's who we were, so who better to train them up," said Dana, "and now we are like the Navy Seals of drug programs, we're tough."

The initial six-week store shutdown was alarming, then anticipated relief in May did not come.

"We cannot do any kind of curbside sales because it's not realistic," said Dana. "Our stores have 10,000 square feet of space, so having a few items out front isn't going to do it."

So they re-opened to donations and customers, with precautions.

Masks are required, surfaces are sanitized, and merchandise that is tried-on is set aside for a few days.

"We're not looking for a fight, we just said we understand your position, please understand ours, we can't close," said Michael.

Santa Rosa Police say there were complaints about Crossing the Jordan opening prematurely.

"Every other business in Santa Rosa has complied," said Chief Rainer Navarro, "and we can't give one business special treatment over another when this is impacting the entire city."

Navarro says warnings were effective elsewhere, and that Crossing the Jordan is the only business cited, as many merchants adapt to curb-side restrictions.

"It's a difficult time right now and we understand that, but it becomes more difficult when someone refuses to follow the law," siad Navarro.

"We have other retail stores and thrift shops we haven't had any issues with, this is the only one we've had to do enforcement."

But the owners of Cross the Jordan argue, it is an essential enterprise that changes -even saves- lives.

"I'm learning how to manage a business, and interact with people," said resident Melissa Gulley, 32, who has been able to reunite with her two young sons as she participates in the program and works in the thrift stores.

"I was what you would call a functioning addict, and I did escape that lifestyle and found Crossing the Jordan, and everything I desired to become was here."

The housing, job skills and rehab programs depend on store sales.

"I was sentenced to be in the program, court-ordered, but I choose every day to stay here," said Dylan Beck, 25.

"Without it, I would be in prison or dead."

Beck manages a store, and says clients like himself are impressed at Bryant's commitment to remain open, despite citations.

"It's super-heartwarming that someone would actually take a stand for the community we have here."

Crossing the Jordan already expects to lose a few stores due to unpaid rent after the pandemic hit.

It has established a GoFundMe account  and filed a court-challenge to the local and state orders.

The Bryants hope for a sympathetic judge as the citations pile up.

To make it easier, Michael simply reports to Police headquarters every morning for his citations, so officers don't have to come to a store.

He is racking up three violations every day- one for each Santa Rosa store.

Added Michael, "these people in our program are like family and nobody has ever stood up for them, so it's time somebody did."