SOUTH POINT, Ohio - The first responders to a crash in Ohio were treated to an early Halloween scare after finding a bloodied woman emerge from her totaled car.

Sidney Wolfe, a student at Marshall University in West Virginia, was driving home from a haunted house event where she was promoting an upcoming musical adaptation of Stephen King’s horror novel “Carrie.”

“If anyone wants to know how my weekend went I totaled my car while dressed up as Carrie and everyone who was a first responder thought I was dead HAHAHAHA IM SO SORRY,” Wolfe wrote on Twitter, alongside photos of her costume and damaged vehicle. 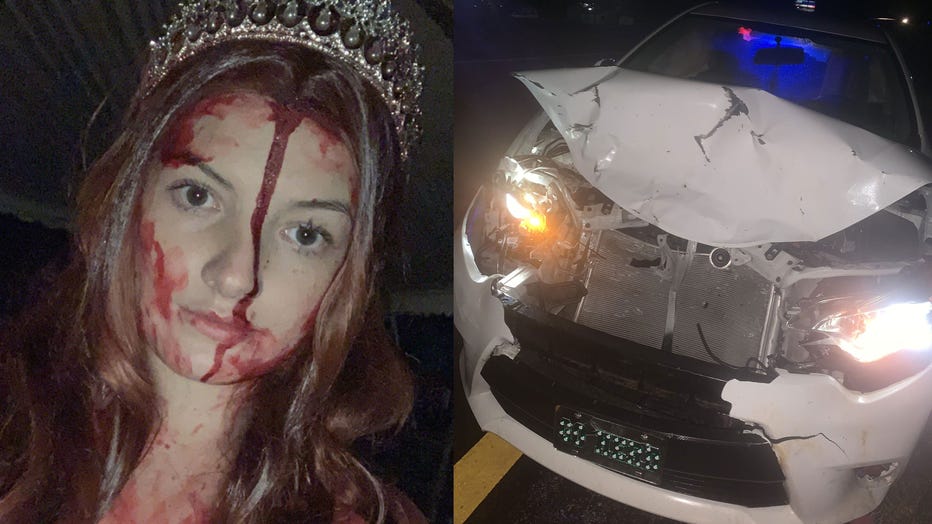 Sidney Wolfe is pictured in a costume to promote “Carrie The Musical,” alongside a photo of her car in the crash. (Photo credit: Twitter/SidwWolfe)

Dressed as Carrie White — complete with a prom dress, tiara and plenty of fake blood — Wolfe said she struck a deer that ran in front of her car.

“At the end of the night, I was too tired to shower and remove my makeup so when I wrecked the first responders saw my blood and freaked,” she wrote.

“The very first responder was a gentleman that pulled over being a Good Samaritan,” Wolfe told HuffPost. “You could tell he was horrified.”

“Next came the police officers who were like ‘oh man’ and kept asking over and over again if I needed medical assistance,” she told the website. “The second round of cops that came weren’t in on the makeup and said, ‘Are we just gonna ignore that blood is dripping and she needs medical assistance?’”

Wolfe said she was uninjured in the crash except for a slight bruise on her leg.

“I’m very lucky,” she said. “It’s just funny because I looked terrible. God was looking out for me.”