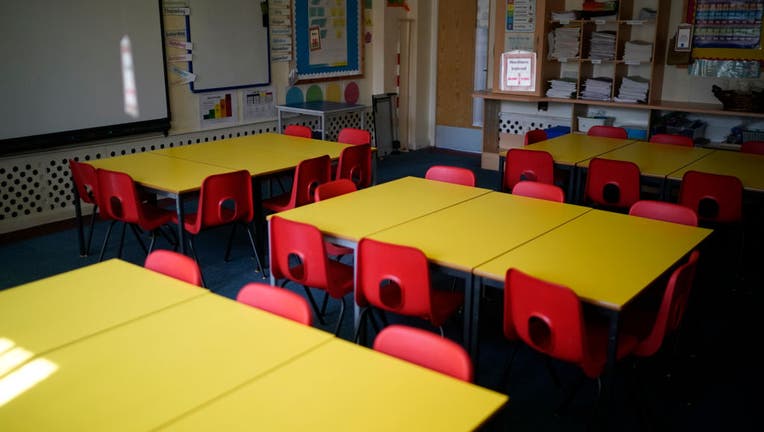 OAKLAND, Calif. - School districts may have another opportunity to lay off teachers, which they normally cannot do after mid-May, if the Legislature approves the budget cuts Gov. Gavin Newsom is proposing.

If adopted next month, Newsom's proposed 8 percent cut to districts' general fund would activate a state law not used since the Great Recession.

It would set in motion a layoff period through Aug. 15 for those districts that choose to use it.

Most districts probably wouldn't; they and education leaders are arguing they will need more funding with more teachers, not fewer, to reopen schools to handle health risks, social distancing demands and students with learning deficits from months of school closures.

However, some districts were already in perilous financial conditions heading into the next fiscal year, before Newsom proposed budget cuts last week, and might choose furloughs to avoid bankruptcy and a state takeover.

"August layoffs will be the absolute last option that many school districts would resort to," said Michael Hulsizer, chief deputy for governmental affairs for the Kern County Superintendent of Schools. "But depending on the level of reserves and extent of the cuts, a district might have to look at this option."

The California Teachers Association plans to ask the Legislature to suspend the provision in the Education Code setting the conditions for a mid-summer layoff. The Legislature has done that twice, in 2002-03 and 2011-12, in response to lobbying by the CTA.

In other years during the Great Recession, the Legislature waited too long to pass a state budget for an August layoff to take effect.

"The state cannot add insult to injury by laying off any teachers at this moment in history when our students need to heal in a safe and secure learning environment," CTA President E. Toby Boyd said in a statement. "Our students cannot endure another blow following this coronavirus crisis."

The CTA will ask the Legislature to extend the prohibition on layoffs to hourly or classified workers, who include bus drivers, janitors and teachers' aides, said CTA spokeswoman Claudia Briggs.

The statute on August layoffs applies only to teachers and administrators, and districts currently have more latitude on when and how to lay off classified employees.

Newsom has not announced a position on suspending August layoffs.

The Department of Finance declined requests for comment. During an online forum organized by State Superintendent of Public Instruction Tony Thurmond on Thursday, panelist Erika Jones, a Los Angeles Unified teacher and CTA board member, said the prospect of layoffs is making it difficult to plan for distance learning.

"How can we really imagine what our classrooms could be under the guidance of science in making sure our students are safe, knowing that we have massive cuts coming?" she asked. "So this isn't the time to even think about layoffs."

In a normal year, school districts must notify teachers annually by March 15 if there is a chance they may be laid off in the next school year.

Districts then have until May 15, six weeks before the deadline for passing their budgets, to decide which permanent teachers will be let go.

With few exceptions, tenured teachers - those no longer on probation - must be let go based on seniority. The trigger for an August layoff occurs when a district's revenue for the Local Control Funding Formula, which comprises the bulk of its state funding, fails to increase at least 2 percent per student from the previous year.

The funding formula sets a uniform base level of funding per student, with additional money based on the enrollment of English learners and low-income, foster and homeless students. In his initial budget for 2020-21, Newsom proposed to increase the Local Control Funding Formula by 2.3 percent, for a cost-of-living adjustment.

But last week, in his annual May budget revision, Newsom proposed eliminating the COLA and then cutting nearly 8 percent - $6.4 billion - from what districts got last year under the funding formula. Although staff pay and benefits make up between 85% and 90% of most districts' budgets, districts have options beside layoffs to reduce expenses.

They can cut non-salary costs, not fill vacant positions, renegotiate with unions to scale back pay increases or reduce health benefits for current employees and for retirees in those districts, like Los Angeles Unified, that still offer them.

During the last recession, unions in some districts agreed to reduce the school year up to five days and eliminate training days - in effect taking a pay cut.

However, Newsom so far has not proposed reducing instructional time as an option. An 8 percent budget cut could expedite problems for districts that have been eating away at their budget reserves, starting with the four districts - Sacramento City Unified, Sweetwater Union High School District in San Diego County, Southern Kern Unified and Belridge Elementary, both in Kern County - that county offices of education and the state financial agency, FCMAT, have given a negative rating.

That means they could have trouble making payroll next year and could be the first to consider giving layoff notices in June or July.

A multi-year recession would further weaken the 41 districts with a "qualified" financial rating, which are projected to have trouble paying their bills in 2021-22 or 2022-23.

These include West Contra Costa, Oakland, East Side Union in San Jose, San Diego and Santa Rosa. During the height of the Great Recession, 176 districts were designated qualified.

In his revised budget proposal, Newsom stipulated that the $6.4 billion budget cut will be rescinded if Congress provides schools at least that amount in the next stimulus legislation.

The House has included $100 billion for schools nationwide in the $3 trillion HEROES (Health and Economic Recovery Omnibus Emergency Solutions) Act that it passed this month.

California's share would be about a tenth of that, but the Senate has balked at passing it.

Sara Bachez, assistant executive director of governmental relations for the California Association of School Business Officers, said that while districts are pressing for additional state and federal funding, the association urges the Legislature "to resist any measures to prohibit the use of the August layoff window," given the proposed state budget.

"Ideally, districts shouldn't be laying off staff, but that's not the world we live in," she said.