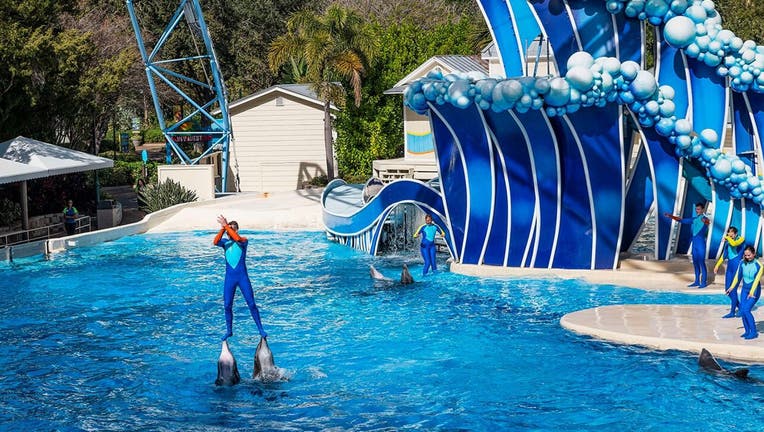 In the most objected-to stunt, performers would ride two dolphins at the same time by standing with each foot atop one of the animals’ beaks, or “rostrums.” (Photo by John Greim/LightRocket via Getty Images)

FOX NEWS - SeaWorld performers will no longer stand on and ride dolphins, a practice that has been under heavy criticism from PETA and other animal rights activists over the past year.

The surprising reform, revealed in a letter last Friday from a SeaWorld Entertainment company lawyer to the Securities and Exchange Commission, comes after an intense battle with the animal rights group, which acquired 163 shares in the company as of Dec. 10.

In the stunt, performers would ride two dolphins at the same time by standing with each foot on one of the animals’ beaks, or “rostrums.”

PETA has decried the stunt as standing on the dolphins’ “faces.”

“In order to address the most pressing issue that SeaWorld faces today—the public’s continued opposition to captive-animal displays—the shareholders urge the board to stop allowing trainers to stand on dolphins’ faces and ride on their backs in exploitative and potentially harmful circus-style shows,” reads the shareholder’s proposal, made by PETA — according to the letter to the SEC.

However, SeaWorld’s lawyers also thrashed PETA in the letter for its characterization of the practice of standing on the mammals’ faces as “unclear and misleading.”

According to SeaWorld, a bottlenose dolphin’s rostrum “serves a different function to a face” and “there is no literature to suggest that standing on the rostrum is harmful in any way to the animal.”

SeaWorld also claims that it never provided “circus-style shows” and only lets trainers at one of its 12 parks stand on the bottlenose dolphins.

PETA quickly posted its victory cry on its website after “SeaWorld admitted that it’s ending the cruel practices.”

“It’s unacceptable for smart, sensitive dolphins to be used as surfboards and launch pads in these cruel and demeaning stunts,” PETA Executive Vice President Tracy Reiman said in a Dec. 10 letter. “The very least that SeaWorld trainers can do for the miserable animals in their custody is not stand or ride on them, and PETA is taking action to end this practice immediately.”

SeaWorld has struggled to maintain relationships with other companies, as some, including Virgin Holidays, have stopped offering tickets to SeaWorld.

The company has continuously suffered from poor public relations — from deaths of its whales to insider trading — in the aftermath of the documentary “Blackfish,” which revealed the company’s mistreatment of its orcas.

This story was originally published by the New York Post.