The second victim was found overnight, officials said during a Tuesday briefing on the blast.

Five people are in critical condition – but officials have not received any reports about people who may still be unaccounted for.

One person is dead and seven people were rushed to the hospital after what fire officials described as a 'major explosion' in Baltimore on Monday.

Seven people were reportedly injured during the blast.

Dozens of firefighters converged on the piles of rubble. A fourth house in the row was ripped open, and windows were shattered in nearby homes, leaving the northwest Baltimore neighborhood of Reisterstown Station strewn with glass and other rubble.

“It’s a disaster. It’s a mess. It’s unbelievable,” said Diane Glover, who lives across the street. Her windows where shattered and her front door was blown open. “I’m still shaken up,” she said hours later.

Seven people were hospitalized, while a woman was pronounced dead at the scene, a fire spokeswoman said. Rescuers were painstakingly going through the rubble by hand, prepared to work into the night.

“We’re trying to make sure that we comb through every area to determine if there are any victims inside," Baltimore Fire Department spokeswoman Blair Adams said at an afternoon news conference.

While the cause wasn’t immediately clear, The Baltimore Sun reported last year that dangerous gas leaks have become much more frequent, with nearly two dozen discovered each day on average, according to the utility’s reports to federal authorities. The Baltimore Gas and Electric Co. has thousands of miles of obsolete pipes that need to be replaced, an effort that would cost nearly $1 billion and take two decades, the newspaper said.

BGE said it responded to the scene at the fire department’s request to shut off all gas and electric service to make the scene safe. BGE has canvassed the area and found no current readings of gas. A statement from the utility said it will conduct an investigation of its equipment in the area.

“Area inspections will encompass homes and gas equipment in a wide area to ensure there is no additional damage,” the statement said. “In addition, BGE is reviewing records for this area, including any reported gas odors, recent inspection results and repairs.” 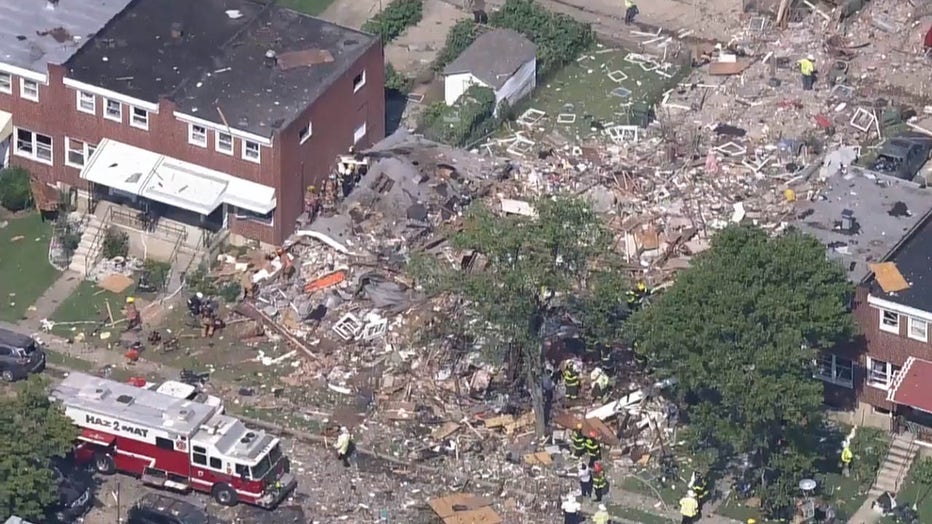 Glover, 56, and her 77-year-old father, Moses Glover, were at home when the massive explosion shook their house, knocking over a fan and some of her DVDs.

“I jumped up to see what was going on. I looked out the bathroom window and there was a house on the ground,” she said. “It sounded like a bomb went off.”

Dean Jones, 36, who lives nearby, ran to the scene. He said he saw a mess of bricks, glass and cinder blocks — and also a box of pancakes.

“You could tell this was a house that people lived in,” he said.

Jones said he and others began calling out for survivors and located an older woman who was eventually pulled out by firefighters. Kevin Matthews, who lives on the block, told The Baltimore Sun that he could hear trapped children shouting: “Come get us! We’re stuck!”

Barry Leventhal, whose warehouse equipment business is about 150 feet (46 meters) from the blast site, said he was in his warehouse when the explosion erupted and shook his building, damaging lights and a concrete wall. 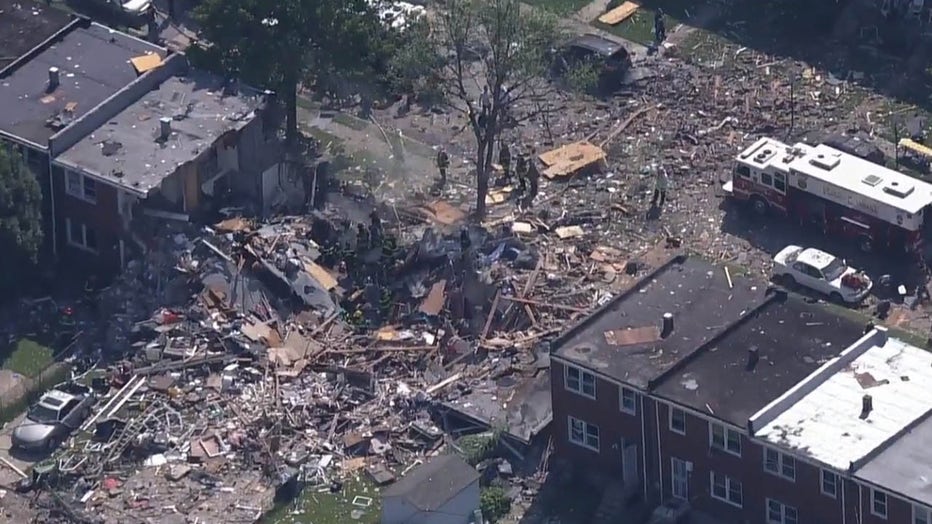 Fortunately, none of the company’s 10 employees was injured.

“We thought a plane crashed or something. We couldn’t figure it out,” said Leventhal, the owner of Everything Warehouse.

BGE asked the Maryland Public Service Commission to approve a new gas system infrastructure and a cost recovery mechanism in late 2017 to pay for upgrades.

“Founded in 1816, BGE is the oldest gas distribution company in the nation. Like many older gas systems, a larger portion of its gas main and services infrastructure consists of cast iron and bare steel – materials that are obsolete and susceptible to failure with age," the PSC wrote in a 2018 order approving a modernization plan.

When aging pipes fail, then tend to make headlines. Last year, a gas explosion ripped the façade off a Maryland office complex in Columbia, affecting more than 20 businesses. No one was injured in the explosion early on a Sunday morning. In 2016, a gas main break forced the evacuation of the Baltimore County Circuit Courthouse. Under Armour Inc. had to evacuate its Baltimore office after a gas main break in 2012.

Baltimore City Council President Brandon Scott said he needs “the entire city of Baltimore right now to focus on hopeful prayers for those individuals that have been impacted by this.”

“I want everybody in the city really to rally around those individuals that are still fighting for their lives,” he said at a news conference.

This story has been corrected to show that a quote about BGE being the “oldest gas distribution company in the nation” was written by the Maryland Public Service Commission, not BGE.