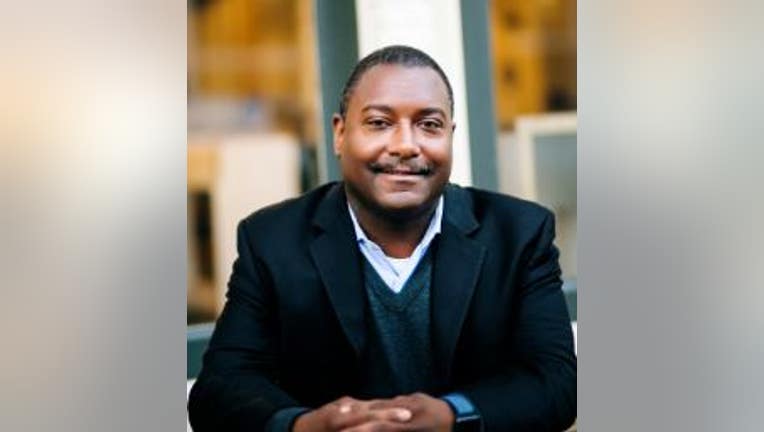 Kenya Wheeler, senior planner for the SFMTA and chair of Oakland's bicyclist and pedestrian advisory commission

OAKLAND, Calif. - The security company hired to protect high-end Oakland apartments, and whose guards were captured on video confronting and detaining a community leader for taking photographs of bike racks on a sidewalk, has been fired, according to a spokesman for Alexan Webster, the name of new apartments in the city's Uptown neighborhood.

"They were let go because they confronted someone on a public sidewalk when there was no reason to confront him at all," a spokesman for the company told
KTVU on Friday.

Alexan Webster's actions come after Kenya Wheeler, a senior government transportation planner, detailed on Facebook his interaction with two private security guards on Wednesday about 9 p.m. after he was coming home from a yoga class along Valdez Street north of 23rd Street.  Wheeler could not be reached for comment on Friday. But in his public post, he said he had been taking pictures of bike racks covered with yarn. It’s an artistic concept called “yarn bombing” and the whimsical racks can be spotted in many cities throughout Oakland and beyond.  Of note: Wheeler helped design that area when he was a senior planner at BART and he also is chair of the Oakland Bicyclists and Pedestrian Advisory Commission. He is also African American.

As he was snapping photos, Wheeler said two security guards from Alexan Webster, came out to ask him what he was doing. It’s unclear if there was a language barrier. English was not the guards’ first language and from the video, there appears to be some confusion as Wheeler explained that he lived in the area and was taking pictures of the bike rack. Wheeler also noted that he wasn’t sure if the guards understood him.

"They were let go because they confronted someone on a public sidewalk when there was no reason to confront him at all."

At one point, Wheeler said one of the guards had drawn what appeared to be his firearm and was approaching him. All Wheeler was carrying, he said, was an umbrella and smartphone. Wheeler said that because he believed what looked like to be a gun was now involved, he did not feel safe leaving. The guards called police and he waited for about 20 minutes until they came. The Alexan Webster spokesman said he did not know if the weapons were guns or not.

When Oakland police officers did finally arrive, Wheeler said that they acted “very professionally” and were able to resolve the situation. He said an apartment business manager also arrived and she ended up apologizing to him. The company did not immediately return KTVU’s email seeking more information on Friday morning. Wheeler wrote that the business manager told him that the residents in the upscale apartments have had some break-ins and that their security guards were being more aggressive about safety threats.

Wheeler’s tale is also reignited the debate over gentrification and how housing costs have created deep divides and deep mistrust. Apartments run from about $3,000 a month for a one-bedroom to nearly $5,000 a month for a three-bedroom.

“There are too many incidents regarding Black and Brown residents in their own hometowns being pushed out, marginalized, and harassed by transplants,” wrote Wheeler’s friend Tim Perry. “And their gentrification Gestapo and it's got to stop.”

Wheeler said that he understands that there is the need to be vigilant against crime. Still, he wrote, “I didn’t pose any threat to the building or neighboring property and the way I was treated extremely inappropriate - from what seems to be an unlawful detention on a public street to drawing a weapon on me.”

Wheeler added: “I shudder to think what could have happened if someone wasn’t as calm and collected as I was in this outrageous situation with these hot-headed security guards. This kind of behavior is not tolerable and I think action needs to be taken by this developer, property manager and the City of Oakland to ensure this doesn’t happen again.”

Wheeler’s online resume boasts a long career in urban and transportation planning. He is a senior environmental planner at the San Francisco Municipal Transportation Agency, and a former senior planner for the city of Compton and BART. He also was a regional field organizer for President Obama and he has a bachelor’s in environmental science UC Santa Cruz and took a Master of City Planning program at UC Berkeley.

Wheeler’s post has started to spread on social media, catching the attention of not only the mayor, who said what happened to Kenya was "unacceptable."

Her spokesman said her office's Director of Community Engagement will meet with the apartment managers in question, along with managers of other new developments to both welcome them to town, but also lay out what the city's values are. The outcome of these meetings, the spokesperson said, is so that the newcomers know how to get engaged in the community and know what "the expectations are to be a good neighbor in Oakland."

What happened to Wheeler is resonating with many regular people too, who do not view what happened as an innocent mistake, but a situation that has exposed, yet again, a deep cultural divide and institutional racism.

“You literally feel at times as a black man that you are not wanted in the Bay,” wrote his friend, Daniel Charlier Smith. “Makes me angry at times.”
It’s even more ironic, his friends note, because of who Wheeler is.

Wheeler “literally designed the area he was stopped by private security,” wrote Peter Delgado Van Tassel. “I’d rather have dozens of cars broken into than one innocent person have a gun pulled on them.”

Some people on Wheeler's Facebook post asked him why didn't just show the guards pictures of the bike racks adding that security was just doing their job.