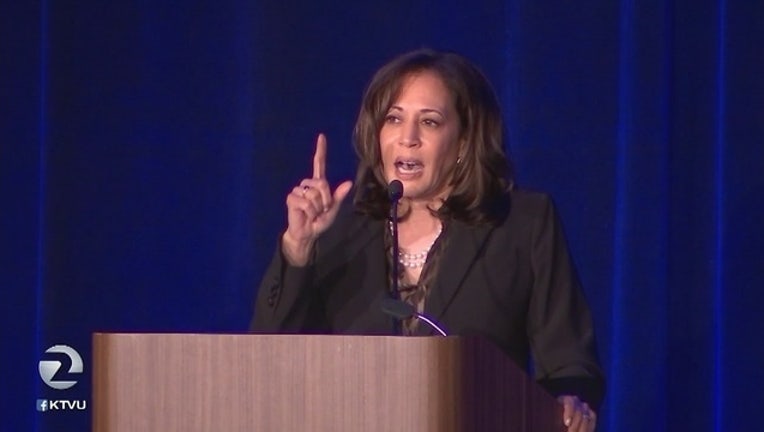 In a letter sent on Tuesday to the San Francisco-based company's CEO Jack Dorsey, Harris presents her argument that the president has engaged in violating the terms of the user agreement.

She writes that the micro-blogging site's policy "specifically states that users 'may not engage in the targeted harassment of someone, or incite other people to do so,' which includes "violence against an individual or a group of people." Harris elaborated on the policy and stated it prohibits the "glorification of violence."

Harris, California's former attorney general, took a more public approach on her own Twitter account in the lead up to her letter.

A day later, she tweeted that the president's tweets about the whistleblower in his Ukraine scandal that led to his impeachment inquiry, "represent a clear intent to harass, intimidate or silence their voice." She added that his blatant threats put "Democracy in danger."

In June, Twitter announced a new policy that stated presidents and other world leaders in the political realm who use Twitter to threaten and abuse others would be subject to warning labels on their tweets.

Harris cited several specific examples of the offending tweets in question. A simple scroll through the president's prolific Twitter account shows what Harris is talking about.

Over the weekend, the president said he deserved to meet his accuser and that the whistleblower would suffer "Big consequences" if they were spying on him.

In her letter, Harris argues that the whistleblower is mischaracterized by the president as a "spy."

"The dictionary definition of a 'spy' is 'a person employed by one nation to secretly convey classified information of strategic importance to another nation.'" She continued to write that the president implied that the whistleblower committed treason and that the punishment should be death.

Harris also mentioned tweets by the 45th Commander in Chief that target Rep. Adam Schiff. The president asks that Schiff be questioned at the highest level for "Fraud & Treason."

One of the Trump tweets that sparked plenty of reaction was the mention of "Civil War" if Congress issued articles of impeachment against the president. The president said if he is removed from office, the country would never heal.

"These are blatant threats," Harris wrote. "We need a civil society, not a civil war."

Harris pointed out Twitter has in the past suspended accounts of other people who have violated the terms of agreement, including InfoWars host Alex Jones, Martin Shkreli (often derided as "Pharma Bro") and actor James Woods.

While he doesn't see the issue as a legal argument, Tucker said Sen. Harris probably has a good case in arguing that the president has violated Twitter's prohibition against harassment of other users.

"For Twitter to kick Trump off the platform would be an enormously costly political step. The platforms are already extremely concerned with not being seen as favoring one party over another." However, according to Tucker, there is more pro-Republican disinformation than pro-Democrat disinformation.

"Removing the face of the Republican party from Twitter would lead immediately to charges the platform had a pro-Democrat bias, even if Trump had violated the terms of service. Thus it seems highly, highly unlikely that Twitter would agree to Harris' request."

KTVU has DM'd Jack Dorsey, but has not heard back. We will update the story if Twitter responds or issues a statement.