Whale found dead with 220 pounds of trash in stomach

ISLE OF HARRIS, Scotland - A sperm whale was found washed up on a Scottish beach with 220 pounds of fishing nets and other garbage in its stomach.

The sub-adult whale was found on the shore of Seilebost Beach on Scotland’s Isle of Harris. It measured nearly 46 feet long and weighed roughly 26 tons, or 52,000 pounds, according to Dan Parry, a resident who works to clean up the beach and administrator for the Facebook page Luskentyre Beach - Isle of Harris.

The male whale was found stranded on the beach and died on Nov. 28, according to Scottish Marine Animal Strandings Scheme, an organization that investigates stranded marine animals. 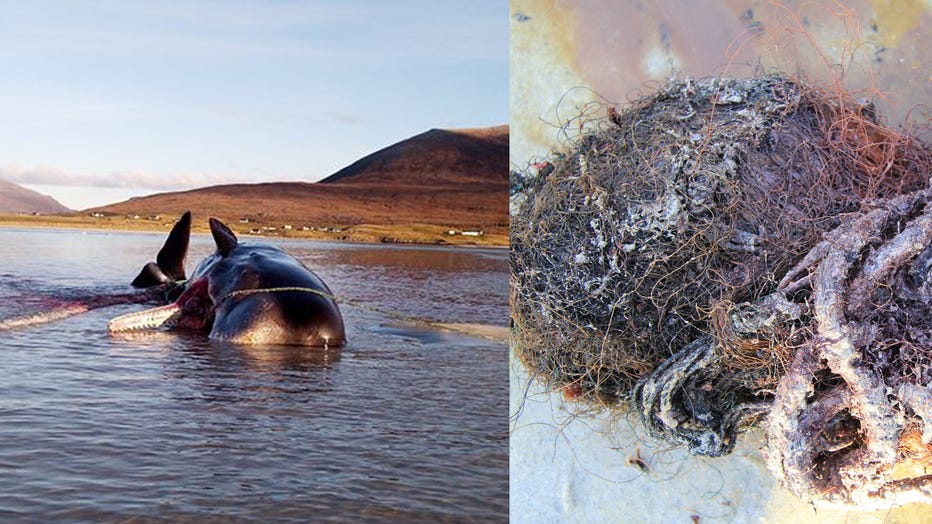 The sperm whale is shown in a provided image, alongside rope and other netting removed from the whale’s stomach. (Photo credit: Dan Parry / Luskentyre Beach - Isle of Harris on Facebook & Scottish Marine Animal Strandings Scheme)

“All this material was in a huge ball in the stomach and some of it it looked like it had been there for some time,” SMASS wrote in a Facebook post, adding that it “wasn’t in particularly poor condition” and it couldn’t confirm that the trash had contributed to its stranding.

“This amount of plastic in the stomach is nonetheless horrific, must have compromised digestion, and serves to demonstrate, yet again, the hazards that marine litter and lost or discarded fishing gear can cause to marine life,” SMASS wrote.

The organization said the debris in the whale’s stomach “seemed to have originated from both the land and fishing sectors, and could have been swallowed at any point between Norway and the Azores.”

The whale was buried on site, SMASS said.

RELATED: Young whale found dead in Philippines with 88 pounds of plastic in stomach