Marty Mendoza’s request for Christmas cards for his adult son led to thousands of cards and packages from around the world being sent to the Texas family.

BELTON, Texas - A stay-at-home father’s request for Christmas cards for his adult son, who suffers from a severe form of autism, has led to strangers sending more than 10,000 in the mail and counting.

Marty Mendoza, of Belton, Texas, has cared for his son, Marty Jr., alone for the last 30 years. Mendoza said his 33-year-old son is non-verbal and suffers from seizures.

In a Facebook post on a page dedicated to children with special needs, Mendoza shared his family’s story and said Marty Jr. has “never really had a Christmas” because they live on a tight budget.

Mendoza asked for strangers to send his son Christmas cards to brighten up his holiday and show him “he’s not lost in this world.” 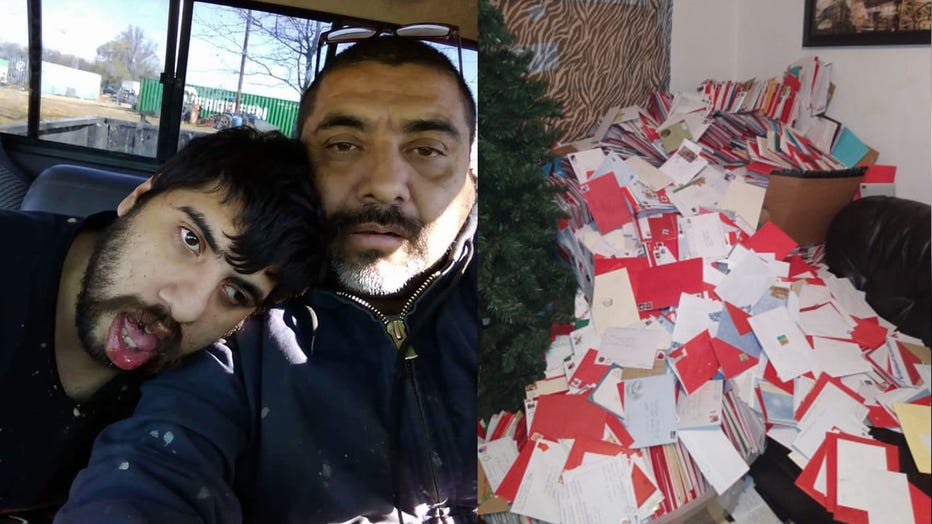 Marty Mendoza, of Benton, Texas, is pictured with his 33-year-old son, Marty Jr., alongside a photo of the thousands of cards they have received in the mail this season. (Photo credit: Marty Mendoza)

"I've been his mom and dad for almost 30 years. My ex-wife, when he was born, she up and left when he was about 2 years old," Mendoza told KCEN-TV.

Mendoza told the station that a whole room in their home is dedicated to his son, where the two watch movies together on a projector screen and listen to music every day.

"He's my whole world," Mendoza told KCEN. "I've never left his side and he hasn't left mine."

The Dec. 11 Facebook post has been shared more than 27,000 times — and led to Mendoza and his son receiving thousands of Christmas cards and packages from around the world. Mendoza guessed they have received “probably over 10,000.”

"Just for him to open up something and see his eyes light up like he did when he saw Santa Claus. That would just mean the world to me, to be honest," Mendoza previously told KCEN-TV.

Anyone who would like to send a Christmas card can do so at the following address: