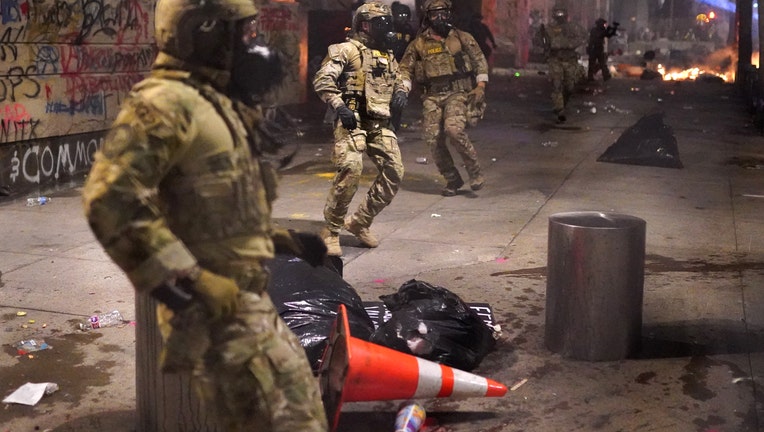 PORTLAND, Ore. - Federal agents again repeatedly fired tear gas to break up rowdy protests in Portland, Oregon, that continued into the early morning Saturday as demonstrations that have happened every night for two months showed no signs of letting up.

Authorities say six federal officers were injured and one person was arrested.

Thousands gathered in front of the downtown federal courthouse beginning Friday evening. Demonstrations have happened in Oregon’s largest city nightly since George Floyd was killed in Minneapolis in May. President Donald Trump said he sent federal agents to Portland to halt the unrest but state and local officials say they are making the situation worse.

Late Friday, a federal judge denied a request by Oregon’s attorney general to restrict the actions of federal police.

The latest demonstration went until federal agents entered the crowd around 2:30 a.m. Saturday and marched in a line down the street, clearing remaining protesters with volleys of tear gas at close range. They also extinguished a large fire in the street outside the courthouse.

Craig Gabriel, Assistant U.S. Attorney for the District of Oregon, said at the news conference that of the six federal officers who were injured, one suffered a concussion and another was taken to the hospital for burns.

He said one person was arrested for failing to comply with orders. That person was later released without charges, bringing the total number of people arrested on or near the courthouse property since early July to 60.

“It’s the very few of the crowd who come not intent on doing anything with their voice but intent on destruction and intent on confrontation, unfortunately, with federal police,” Gabriel said, acknowledging that the majority of protesters are peaceful.

Gabriel said the fence erected around the courthouse has been targeted by “violent agitators.”

“If the courthouse can stand and can have integrity and not subject to damage or attack, then the officers will go home. I think — not to be flippant — but I think it’s that simple,” Gabriel said.

As the crowd grew — authorities estimate there were 4,000 present at the peak of the protest — people were heard chanting “Black Lives Matter” and “Feds go home” to the sound of drums.

Later, protesters vigorously shook the fence surrounding the courthouse, shot fireworks towards the building and threw glass bottles. Many times these actions were met by federal agents using tear gas and flash bangs.

Daniel Pereyo was one protester who was tear-gassed. Pereyo said he had been at the nearby park watching drummers and fireworks being shot, when his face and eyes began to burn.

“It’s extremely painful,” he said. “It’s not the worst pain ever, but it is discomforting and it’s distracting.”

As the crowd dispersed, someone was found stabbed nearby, Portland police said. The person was taken to a hospital and a suspect was taken into custody.

The state attorney general had sued the federal government, saying some people had been whisked off the streets in unmarked vehicles. U.S. District Judge Michael Mosman ruled Friday the state lacked standing to sue on behalf of protesters.

Oregon was seeking a restraining order on behalf of its residents not for injuries that had already happened but to prevent injuries by federal officers in the future. That combination makes the standard for granting such a motion very narrow, and the state did not prove it had standing in the case, Mosman wrote.

Sara Cline reported from Salem. Cline is a corps member for the Associated Press/Report for America Statehouse News Initiative. Report for America is a nonprofit national service program that places journalists in local newsrooms to report on under-covered issues.