NEW YORK - The NYPD is investigating after an 18-karat gold jeweled tabernacle worth more than $2M was stolen from a Brooklyn church.

According to the NYPD, burglars broke into St. Augustine's Roman Catholic Church in Park Slope sometime between 6:30 p.m. Thursday and 4 p.m. Saturday and forcefully cut open an altar.

Once the thieves were inside, they stole the pure 18-karat gold bejeweled tabernacle.

The tabernacle houses the Holy Eucharist, the sacramental representation of Jesus Christ. According to a guidebook posted on the church’s website, the tabernacle was built in 1895 and restored in 1952 and 2000. 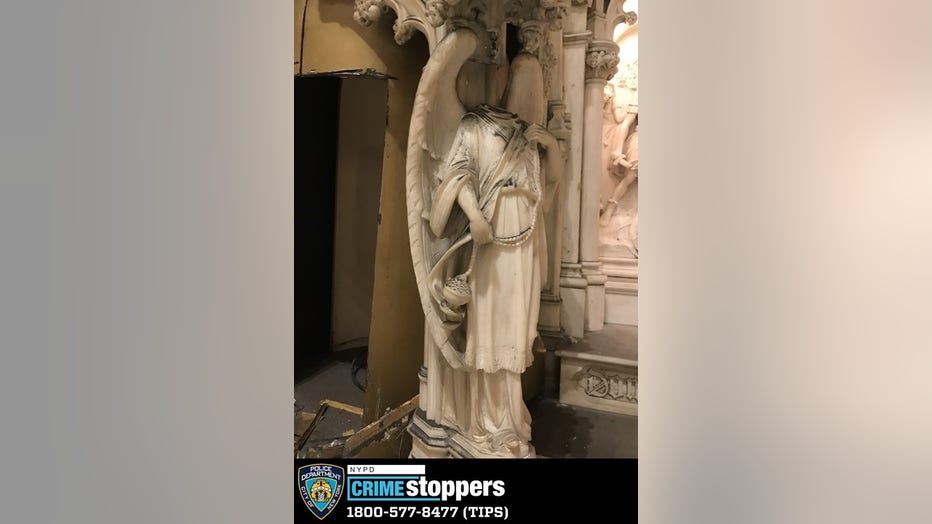 A statue of an angel that was damaged by burglars who broke into St. Augustine's Roman Catholic Church in Brooklyn. (Credit: NYPD)

It’s described as a "masterpiece and one of the most expensive tabernacles in the country, guarded by its own security system," which involves an "electronically operated burglar-proof safe" and one-inch thick steel plates that "completely enclose the tabernacle.

Holy Eucharist, bread consecrated as the body of Christ, was taken from the tabernacle and thrown on the altar.

The church was closed for construction at the time. Camera recordings from the church’s security system were also stolen, the church’s pastor said.

The Diocese of Brooklyn called it "a brazen crime of disrespect and hate" and that it was irreplaceable due to its historical and artistic value. 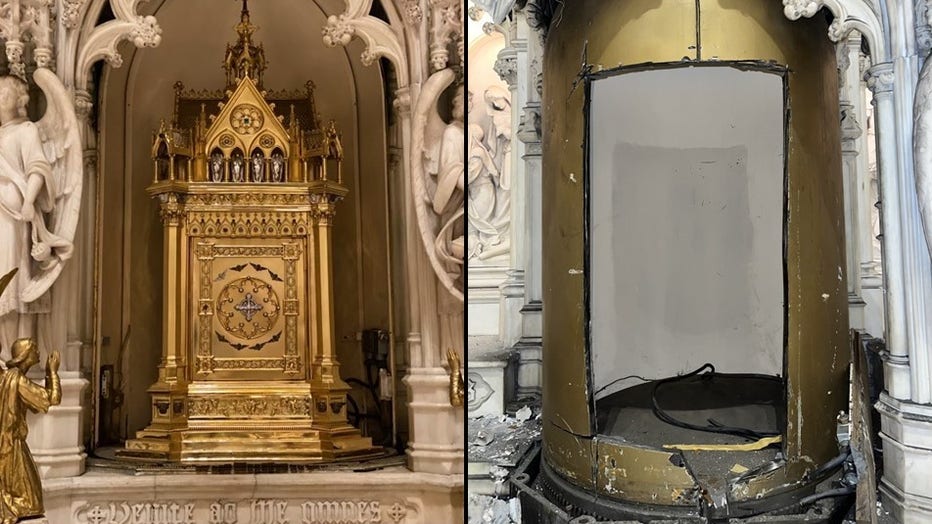 A tabernacle that was stolen from St. Augustine's Roman Catholic Church in Brooklyn. (Credit: NYPD)

In addition, angel statues flanking the tabernacle were decapitated and destroyed, the diocese said. A safe in the sacristy, where priests prepare for Mass, was also cut open but nothing was inside.

"This is devastating, as the Tabernacle is the central focus of our church outside of worship, holding the Body of Christ, the Eucharist, which is delivered to the sick and homebound," Rev. Frank Tumino, the pastor of St. Augustine said in a statement issued by the diocese.

"To know that a burglar entered the most sacred space of our beautiful Church and took great pains to cut into a security system is a heinous act of disrespect," Tumino said.

Anyone with information in regard to this incident is asked to call the NYPD's Crime Stoppers Hotline at 1-800-577-TIPS (8477) or for Spanish, 1-888-57-PISTA (74782). The public can also submit their tips by logging onto the CrimeStoppers website or on Twitter @NYPDTips.