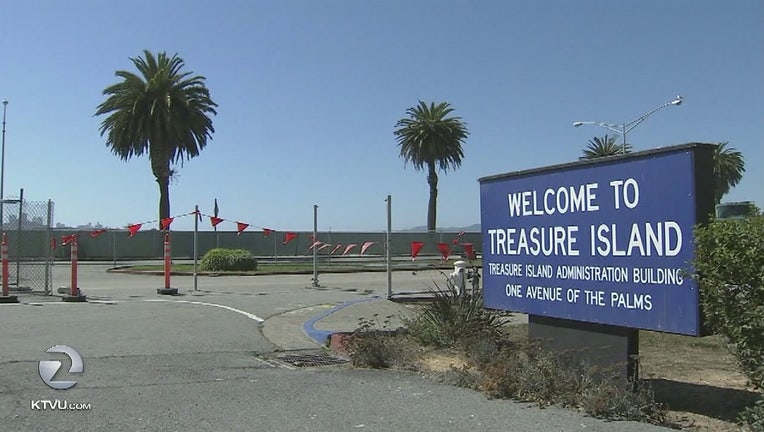 TREASURE ISLAND, Calif. - A 79,000-square-foot space used to produce films on San Francisco's Treasure Island is back in business thanks to a new lease, Mayor London Breed announced Wednesday.

In the past, the space at Hangar 3 has been used as a stage space to build sets for blockbusters like Mrs. Doubtfire, Bicentennial Man, Rent, Patch Adams and many more.

However, in 2010, set production stopped in Hangar 3 and since then it's been used by companies to stage large construction projects.

Through a new lease with the Treasure Island Development Authority, the new space, called Film Treasure Island, will now provide a dedicated space for the region's film industry.

According to Breed, the new lease will bring more economic opportunities for local businesses and create new jobs for residents.

"This reopened space will make it easier and more convenient for television and movie productions to film throughout San Francisco and we're excited to see the productions that come out of this facility," Breed said.

"Attracting filming to San Francisco will benefit our entire economy and local workforce, while also showcasing the beauty and diversity of our neighborhoods, parks and landmarks," she said in a statement.

The large space is able to accommodate large scenery for feature films and television productions that may need multiple sets or large-scale commercial productions.

With a filming place now secured, the city is also offering incentives for companies to film in San Francisco through the city's Scene in San Francisco Rebate Program. The program gives qualifying productions a dollar-for dollar refund of fees and payroll taxes for use of city property, equipment, employees, and or permit fees for films produced in the city.

In addition, a vendor program allows businesses to sign up to offer discounts to production companies and staff, encouraging them to shop locally.

"Our long-term goal is to couple the Hangar and support space with purpose-built sound stages that would complement any new development on the island. Historically, when we have developed studio projects, the surrounding area sees an increase in tax revenue along with job creation in different fields and property values skyrocket as well," said Mark Walter, manager of studio developments for Cinelease, Inc., a partner of Film Treasure Island.