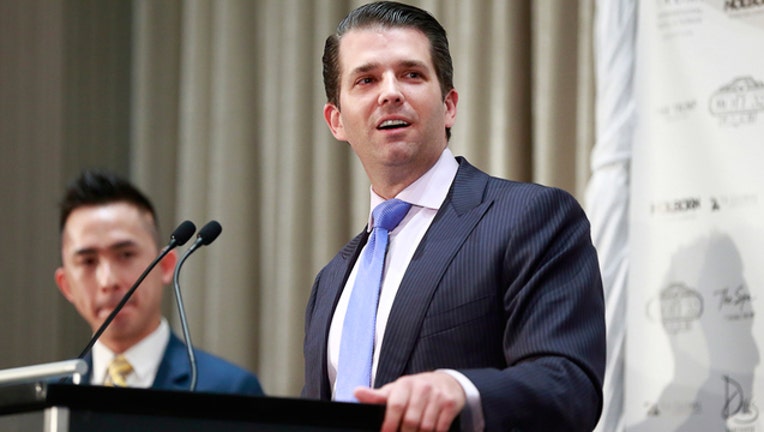 Donald Trump Jr. delivers a speech during a ceremony for the official opening of the Trump International Tower and Hotel on February 28, 2017 in Vancouver, Canada.(Photo by Jeff Vinnick/Getty Images)

WASHINGTON (AP) -- The Latest on the investigations into Russian interference in the 2016 election (all times local):

Donald Trump Jr. has finished a nine-hour interview with the Senate intelligence committee, concluding his third interview on Capitol Hill as part of probes into Russian interference in the 2016 election.

Trump Jr.'s closed-door meeting with Senate staff came a week after he spoke to lawmakers on the House intelligence committee. The Senate Judiciary Committee interviewed him in September.

All three panels are investigating the meddling and whether President Donald Trump's campaign was involved. Investigators have been looking into a June 2016 meeting with a Russian lawyer that Trump Jr. and other campaign officials attended.

The top Democrat on the Senate intelligence panel, Virginia Sen. Mark Warner, has said he wants Trump Jr. to return for a public hearing.

House Republicans are ratcheting up criticism of special counsel Robert Mueller's probe into Russian meddling, questioning whether there was bias on his team of lawyers but stopping short of calling for his firing or resignation.

The criticism directed toward Deputy Attorney General Rod Rosenstein at a House Judiciary hearing comes after the release of anti-Donald Trump text messages exchanged between two FBI officials at one point assigned to the Russia probe.

Republicans on Capitol Hill are unlikely to support Mueller's removal, but some appear to be laying the groundwork for suggesting that the results of the investigation will be unfairly partisan.

Rosenstein was asked by lawmakers if he had seen good cause to fire Mueller, whom he appointed and whose work he oversees. Rosenstein replied that he had not.

The questioning of Rod Rosenstein on Wednesday comes one day after Congress received from the Justice Department derogatory text messages about President Donald Trump from two FBI officials. The text messages ended in late 2016, and the two officials were later assigned to Mueller's team. That group is investigating potential coordination between the Trump campaign and Russia.

Rosenstein says there's a difference between political affiliation and political bias. He says Justice Department officials are entitled to political views but cannot allow them to influence their actions.

The Justice Department official overseeing the investigation of possible Trump campaign ties to Russia says he has no reason to fire the special counsel leading the probe.

Deputy Attorney General Rod Rosenstein said Wednesday he has no good cause to fire special counsel Robert Mueller. The comment came during a House Judiciary Committee hearing where Rosenstein was pressed about the special counsel probe and a series of politically-charged text messages between a pair of FBI officials who were assigned to it.

Republicans are suggesting Mueller's team is biased against President Donald Trump and its conclusions can't be trusted. Rosenstein did not directly address the messages, which are the subject of an inspector general's investigation.

But he says Mueller is conducting himself consistent with the Justice Department's "understanding of the scope of the investigation."

Two FBI officials who would later be assigned to the special counsel's investigation into Donald Trump's presidential campaign described him with insults like "idiot" and "loathsome human" in a series of text messages last year.

Strzok was among the agents working with Mueller to investigate potential coordination between Trump and the Russia campaign. He was also heavily involved in the investigation last year into Democrat Hillary Clinton's use of a private email server.

The text messages ended in late 2016, months before Mueller's appointment.

Strzok left the team last summer after the texts were discovered.