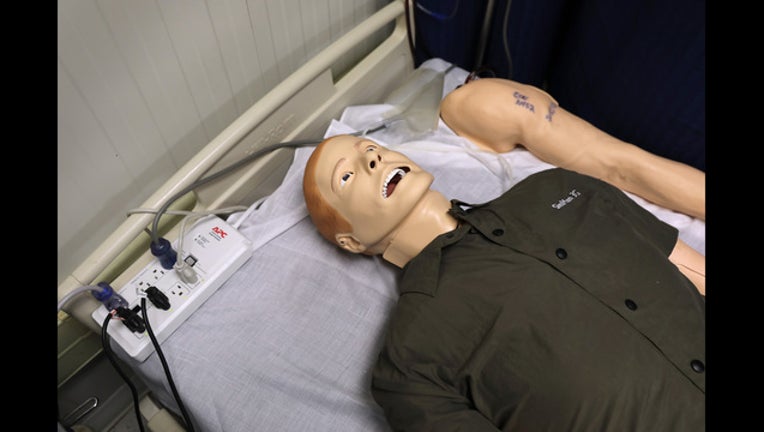 A training dummy lies inside the detainee clinic of the "Gitmo" maximum security detention center on October 22, 2016 at the U.S. Naval Station at Guantanamo Bay, Cuba. (Photo by John Moore/Getty Images)

Trump made it clear during his 2016 campaign for president that he wanted to keep Guantanamo open and "load it up with some bad dudes." But the White House announcement, just before the president's first State of the Union address, marked a formal reversal of President Barack Obama's eight-year effort to close the detention center.

The order says the U.S. maintains the option to detain additional enemy combatants at the detention center in Cuba, when necessary. It requires the defense secretary to recommend criteria for determining the fate of individuals captured by the United States in armed conflict, including sending them to Guantanamo Bay.

"The executive order preserves a vital tool to protect the United States and its citizens from continuing significant threats," the White House said. "The detention of enemies captured in an armed conflict is a lawful and necessary tool of warfighting that must continue to be available to the United States."

Practically, not much is expected to change with Trump's new order, said Lee Wolosky, who was Obama's special envoy at the State Department for closing Guantanamo.

"I don't think signing a new executive order changes very much," Wolosky said. "But as a symbolic matter, it changes a great deal because the two presidents before him were trying to close Guantanamo because they recognized that it was a detriment to our national security. Symbolically, it reaffirms his interest in perpetrating a symbol that has greatly damaged the United States."

It's unclear if Trump's order will prompt much reaction overseas since foreign leaders already knew that he wanted to keep it open. European allies, Muslim leaders and other critics have been vehemently opposed to how detainees have been held at Guantanamo for decades without charge and argue that militant groups have used the controversial lockup as a recruiting tool.

The detention center, which President George W. Bush opened in January 2002 to hold and interrogate suspected enemy combatants, reached a maximum population of about 680 in the summer of 2003. Bush transferred about 500 out before he left office. Obama transferred 197 detainees out, leaving 41, including five cleared for release. So far, Trump has not sent any new detainees to the prison or transferred any out.