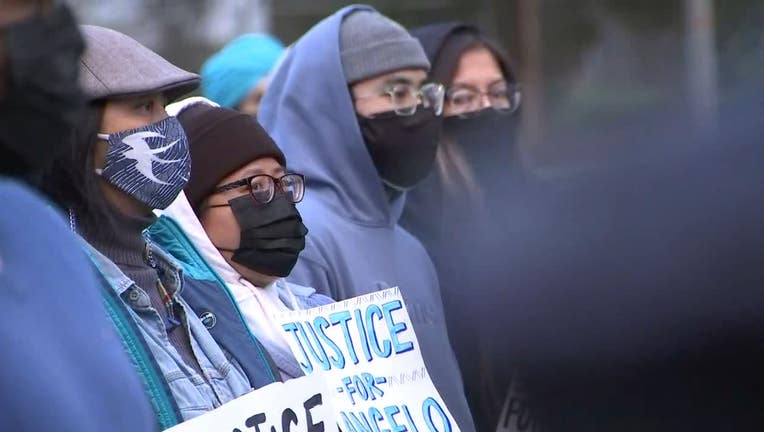 Mourners gather at a vigil for Angelo Quinto in Antioch. They're calling on justice for the 30-year-old who died in police custody while experience a mental health crisis.

ANTIOCH, Calif. - When Angelo Quinto’s family came forward in February with revelations of the young man’s death during a Christmastime police encounter in Antioch, it stunned the community.

It was the first time the public and even the city’s mayor learned about the deadly incident that started as a call for help as the 30-year-old experienced a mental health crisis.

Reform efforts in Antioch are in the spotlight after two recent in-custody deaths of people experiencing mental health crises.

Then only a week later, a second man, 33-year-old Arturo Gomez Calel, died during an apparent crisis when Antioch police deployed a Taser during a struggle in the street.

The two incidents have raised questions about transparency, accountability and the role of law enforcement in a city that has seen rapid demographic changes and resisted police reforms until just recently.

The deaths have also highlighted a larger push for cities to adopt non-police response units to respond to people in crisis.

"It was clear that we needed to have a different environment that our police department was operating under," said Mayor Lamar Thorpe, who was elected in November after running on a platform of police reform.

Those reform efforts are now being closely watched following the deaths of Quinto and Calel. Prior to his election, a then white-majority city council rejected efforts to bring even basic reforms to the department.

For decades Antioch was a predominantly white, working-class community on the outskirts of the Bay Area along the Delta. But as home prices have increased and populations have shifted, Antioch has begun to look a lot more like the rest of the Bay Area.

According to the last census, more than a third of the city is Latino and more than 20% is Black – more than double what it was in 2000.

"It was clear that the leadership was so out of touch and their values were just inconsistent with where the community was at large," Thorpe said in a recent interview with KTVU.

"Law enforcement -- in most situations where the person is unarmed -- needs to be taken out of the response," said Gigi Crowder, Executive Director of the National Alliance on Mental Illness in Contra Costa County.

She lives in Antioch and has been working to train officers in how to respond to crisis calls. But in most cases, she said they shouldn’t even be showing up in the first place.

Antioch is just one example of the fragmented nature of police reform efforts in California and the rest of the nation. The city’s police force is just one of more than 500 law enforcement agencies in California, and it’s up to each one to decide whether to adopt best practices in modern policing.

Advocates say more should be done on the state and federal level to compel agencies to undergo basic reforms like issuing body-cameras, and mandatory de-escalation policies for crisis calls.

"There’s a lot of work to do at this moment to rebuild relations between law enforcement and our communities and a big portion of that is how we as a society address those who have mental health challenges," said state Assemblyman David Chiu (D-San Francisco)

He is a co-author of AB 988, a bill that would make 9-8-8 the new emergency number to call for non-police crisis assistance.

Those numbers have likely only increased during the stresses caused by the coronavirus pandemic.

"The police have dealt with more emotional crisis cases than we’ve ever seen before," said attorney Mike Rains, who represents officers in police departments around the state, including in Antioch.

He supports non-police alternatives to mental health calls, but made clear that officers will still be tasked with responding when people are violent and armed.

As Antioch moves forward on its reform efforts, residents are awaiting the autopsy results in the two recent in-custody deaths.

Quinto’s family said police asphyxiated him when they held him down inside the family bedroom with a knee on his neck.

Antioch Police Chief Tammany Brooks later disputed the family’s claim during a news conference, saying "at no point did any officer use a knee, or other body part to gain leverage or apply pressure to Angelo's head, neck, or throat."

Brooks, however, has not said how Quinto died and an autopsy is still pending.

"I though the chief did a dis-service to truth by taking that position without first having seen the completion of an autopsy report," he said.

In the end, Burris and other reform advocates hope the deaths will lead to changes in how police respond to people in crisis.

"It does not have to be and shouldn’t be the heavy-handed felony approach," he said.