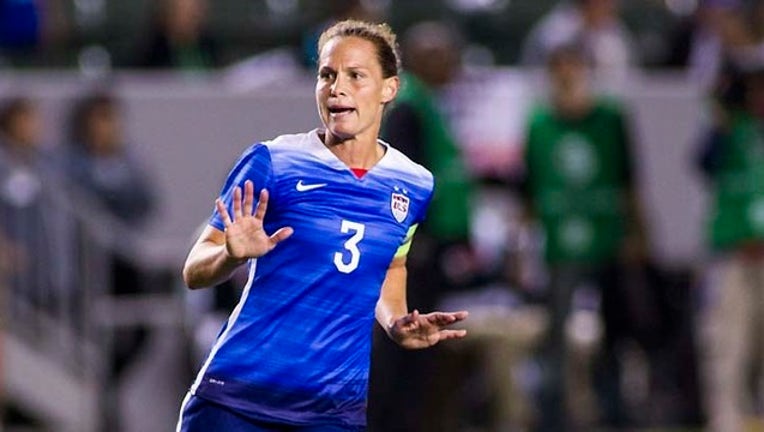 U.S defender Christie Rampone has been to four World Cups, including the last time the Americans won in 1999.

She'll head to her fifth this week, joining a group of just four other women internationally who have appeared in as many.

She's seen the team through the elation of hoisting the trophy at the Rose Bowl those 16 years ago, to the disappointment of 2003, when the United States hastily hosted the event because of the SARS outbreak in China and finished third, and to the sting of 2011 when the team fell to Japan on penalty kicks in the final.

She would like nothing more than to bookend her career with another title.

Rampone will turn 40 during the World Cup in Canada, and it's abundantly clear why she made the team: She's been there before.

"When we get to Canada it's a whole other level," she said. "The preparation is the first phase of it. When we get there, with the pressure and media and the spotlight, the level raises. And each country brings a whole different presence. That's something we have to be ready for and embrace, then put our best soccer out there."

Rampone said the drought between World Cup titles and the frustration that lingers from the runner-up finish in Germany four years ago is driving this squad.

"This is my fifth World Cup and every World Cup has been hard. It hasn't been smooth sailing: We haven't gone in and won every game and it's been great," she said. "There will be bumps, it's just how we overcome those."

The 39-year-old Rampone has been with the U.S. women's team since 1997 and is the most capped active player in the world. Her international appearances fall second only to fellow American Kristine Lilly, who had 352 caps from 1987 to 2010.

Only four other women have played in five World Cups: Lilly, Brazil's Formiga, Germany's Birgit Prinz and Japan's Homare Sawa. Formiga and Sawa are expected to play in their sixth this year.

Rampone has played only sparingly in the lead-up to Canada after dealing with injuries. First it was some strained muscles in her lower back as the result of weight training earlier this year. Then she strained a ligament in her left knee.

The first action she has seen this season came on May 17 when she came in as a second-half sub in a 5-1 victory over Mexico, part of a three-match send-off tour before the World Cup opens on Saturday.

She realizes her primary role has been expanded to include guidance of the younger players who will eventually take her place like Julie Johnston, who has blossomed while Rampone was injured and has won a starting nod.

"I'm constantly communicating on and off the field to make sure we're in a good place and peaking at the right time, and not doing too much but doing enough, and not letting the pressure get to us," Rampone said. "I think our team does well with pressure, and embracing that pressure rather than flinching away from it."

"Great leadership. Confidence," Ellis said in describing what Rampone brings to the team. "You know, I met individually with all the players and my message to her was that she's an integral part of our team's success this summer. "

Rampone said there are distinct differences between the U.S. World Cup teams. Past squads including that '99 team were more defensive, while this team has more offensive threats.

"Now I think we're a defensive unit but we can attack with one or two versus just relying on like a Mia (Hamm), back in the day, when everybody else would just sit behind and if she lost the ball we're gonna defend behind her," Rampone said. "I think now we have more of a creativity and we can expand and go after it which exposes us a little bit defensively but I think we'll take the creativity up top and try and handle it."

Of course, Rampone doesn't want to get too far ahead of herself part of winning a World Cup, she said, is staying in the moment but she sees the elements that could carry this team far.

"We're definitely prepared. This team has been together a long time. There's a great mix of new, young, old, but I think Jill's done a great job with the coaching staff on our preparation whether it's the fitness aspect, preparing us on set pieces, or everything on the run of play, strategy, just all of those things that make up a successful team. We're ready."