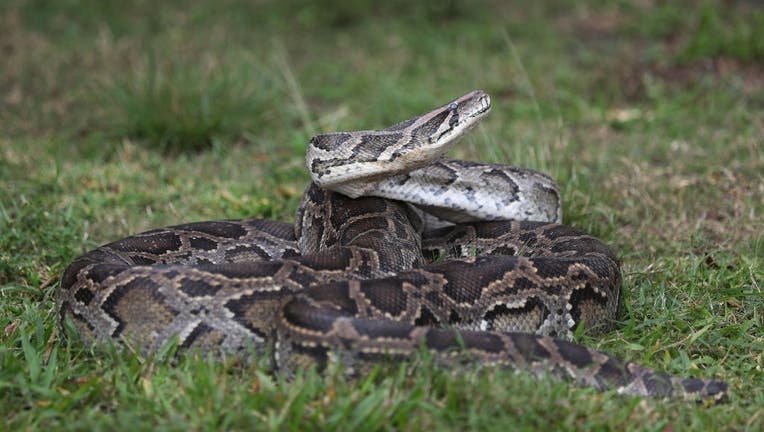 SUNRISE, FLORIDA - JANUARY 10: A python is seen as Robert Edman, with the Florida Fish and Wildlife Conservation Commission, gives a python-catching demonstration to potential snake hunters at the start of the Python Bowl 2020 on January 10, 2020 in (hoto by Joe Raedle/Getty Images)

PORT ST. LUCIE, Fla. - A Florida mom wearing an apron and flip-flips saved the day while helping her python hunting son trap a big snake ahead of Thanksgiving.

The video has gone viral on TikTok.

Florida's 'Python Cowboy, Mike Kimmel, shared a 29-second video of him and his mother trying to free a python from a car tire that had snuck into their garage.

Kimmel’s mother is seen pulling the python’s tail by the car’s trunk while her son tries to push its head through the barrel of the tire.

"My hands are greasy," Kimmel’s mother says in the video.

The dynamic duo finally get the snake out from their car and garage.

Kimmel posted the video on TikTok with the caption, "Thanksgiving in Florida" followed by the hashtag #snakesgiving. It has since racked up over 4 million views.

According to FOX News, the Python Cowboy team is based in Port St. Lucie, Florida, within Martin County. Burmese pythons have been found in the area, along with other parts of South Florida.

Kimmel went viral last year after posting a photo on Instagram with a 17-foot python he captured that ultimately bit him during the struggle.

Kimmel described grabbing the snake, which he said was 150 pounds of muscle. 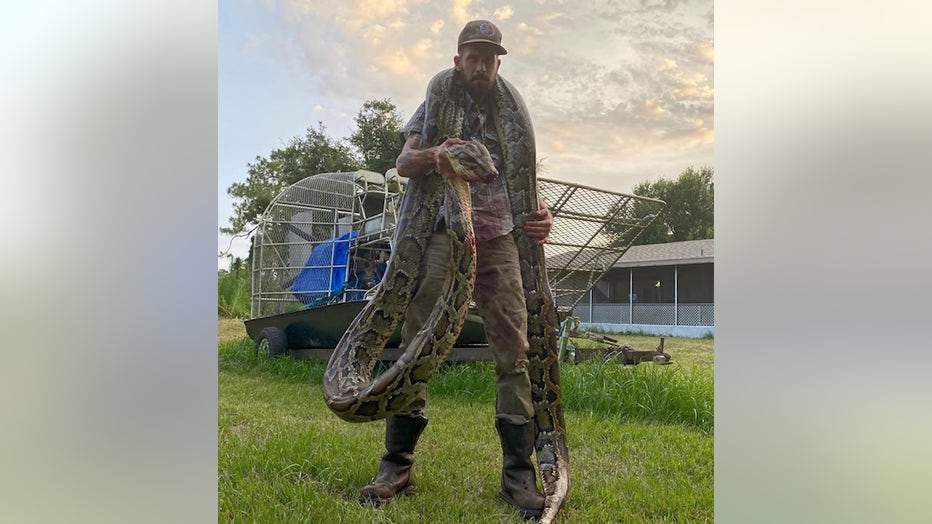 He wrote, "[She] only got me once but that’s all it took... I was punctured quite deep on my bicep and forearm, piercing an artery and hitting some nerves, I was lucky she didn’t latch on and that I was able to pull out of it."

Watch FOX 35 News for the latest viral stories. Get breaking news alerts in the FOX 35 News app. Download for iOS or Android