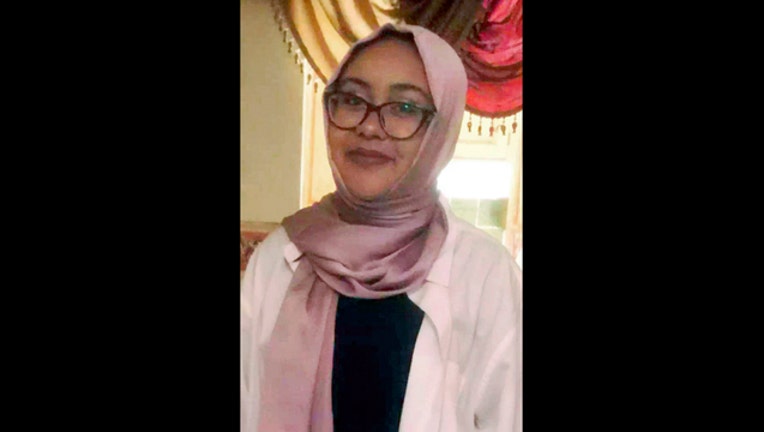 Nabra Hassanen in Fairfax, Va. Police said on Monday, that "road rage" was to blame for the slaying of a 17-year-old muslim girl who was walking with friends to her mosque between Ramadan prayers this weekend. (Courtesy Hassanen Family via AP)

FAIRFAX, Va. (AP) - The Latest on the killing of a teenage girl as she and her friends returned to a mosque in Virginia (all times local):

5:10 p.m.
For the second time, a young graphic artist's rendering of Muslim victims of violence is spreading across the world.

Mohammad Alsalti is a 23-year-old who lives in Raleigh, North Carolina. He said in an interview Tuesday that he created an image in honor of Nabra Hassanen, the 17-year-old Muslim girl who was slain over the weekend in northern Virginia.

The likeness shows a pair of glasses like the ones Hassanen wore, over the outline of her face, wrapped in a headscarf, with the hashtag #Nabra. It's being shared widely online.

Alsalti says he created a similar graphic that went viral in 2015 after three young Muslims were gunned down in their North Carolina home.

Alsalti says Hassanen's slaying hits close to home because he has a sister around her age who looks "just like her."

He says that even though police aren't investigating her killing as a hate crime, it's generating concern among Muslims, and a feeling that "you have to watch your back."
___

A neighbor of the man accused of killing a Virginia teenager says the suspect was a quiet loner who did not appear to have a steady job.

Roger Provus is a 58-year-old disabled Navy veteran who said he lives in an apartment near 22-year-old Darwin Martinez Torres.

Provus says Martinez Torres smoked cigarettes and sometimes wore the same clothes for two or three days at a time. He says they spoke occasionally, when he asked Martinez Torres not to leave trash in the halls and stairwells.

Martinez Torres is being held without bail on a murder charge in the slaying of 17-year-old Nabra Hassanen. He has a public defender whose office declined comment.

Meanwhile, immigration authorities put a detainer on him, saying there's probable cause to believe he lacks permission to be in the U.S.
___

A woman who came to the door at the last known address of the man accused of killing a Virginia teenager says he had been renting a room in the apartment with his wife and their young child.

The woman refused to open the door Tuesday afternoon. She said through the closed door in Spanish that the wife and child moved out after 22-year-old Darwin Martinez Torres was arrested. The woman said that's because of scrutiny of the case.

The apartment was in a sprawling complex with predominantly Spanish-speaking tenants.

A neighbor, who also refused to give her name, said in Spanish that Torres had been living there for at least two years and that he and his wife had a 4-year-old daughter.

Martinez Torres, a citizen of El Salvador, is being held without bail on a murder charge. He was appointed a public defender whose office has declined comment.

Meanwhile, immigration authorities put a detainer on him, saying there's probable cause to believe he lacks permission to be in the U.S.
___

A funeral service is planned for Wednesday for slain Muslim teen Nabra Hassanen at her northern Virginia mosque.

The All Dulles Area Muslim Society mosque announced in a statement that a funeral prayer service for the 17-year-old will be held Wednesday at 1:30 p.m.

Police say Hassanen was returning to the mosque with a group of about 15 teenagers early Sunday during a break from Ramadan prayers when a driver approached them and began arguing with one of the boys. Police say he chased the group in his car, then got out with a baseball bat and caught up with Hassanen, brutally beating her.

Then, police say, he drove off with her in his car, attacked her again, and dumped her body in a pond. Twenty-two-year-old Darwin Martinez Torres has been charged with murder.
___

The principal of the suburban Washington high school that slain Muslim teen Nabra Hassanen attended says the 10th grader was a beloved student and a friend to all.

South Lakes High School Principal Kim Retzer said in a letter Tuesday that she visited with Nabra's family a day earlier. Retzer says she offered condolences and says Nabra will be greatly missed.

Authorities have said an angry driver attacked Nabra with a baseball bat, put her in his car and took her to another location where he attacked her again. Her body was found in a pond.

Police say the 17-year-old left a Sterling-area mosque between Ramadan prayers to get food at a McDonald's with other teenagers. They were on their way back when Darwin Martinez Torres, 22, drove up to their group and an altercation ensued.

The incident is not being investigated as a hate crime.

Retzer's letter says school counselors and a Fairfax County Public Schools crisis team were available Tuesday to support students or staff. She says crisis support also will be available in the coming days.
___

10 a.m.
Vigils are being planned around the country to honor a Muslim teen who police say was fatally beaten with a baseball bat by an angry driver as she walked with friends to a Virginia mosque this weekend.

Women's Initiative for Self-Empowerment CEO Rana Abdelhamid said by telephone that her group is partnering with groups in cities around the nation to hold vigils Tuesday for 17-year-old Nabra Hassanen and stand in solidarity with her family.

Police say the Egyptian-American girl died of blunt force trauma to the upper body after 22-year-old Darwin Martinez Torres of El Salvador attacked her with a baseball bat in a Washington suburb. Police have described it as a road rage incident and say there's no evidence to suggest it was a hate crime.
___

Authorities say a man charged with murder in the death of a Muslim teen who was attacked near her Virginia mosque became enraged after getting in a fight with one of the girl's friends.

Police say 17-year-old Nabra Hassanen died of blunt force trauma to the upper body after 22-year-old Darwin Martinez Torres attacked her with a baseball bat in a Washington suburb.

Police have described it as a road rage incident and say there's no evidence to suggest it was a hate crime.

The girl's father says he doesn't understand how this could have happened and that his daughter was a friend to everyone.