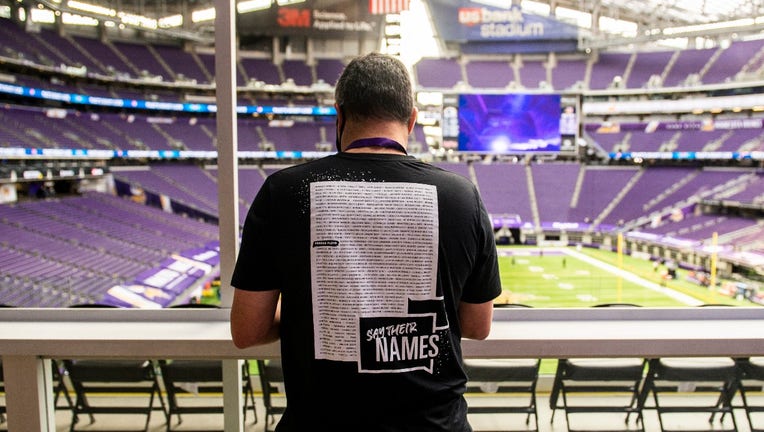 A man wears a "Say their names" t-shirt before the game between the Green Bay Packers and Minnesota Vikings at U.S. Bank Stadium on September 13, 2020 in Minneapolis, Minnesota. The family of George Floyd, who was killed by Minneapolis Police on May ((Photo by Stephen Maturen/Getty Images))

MINNEAPOLIS - The Minnesota Vikings are hosting the Green Bay Packers Sunday at U.S. Bank Stadium to open their 2020 season, and they’re using their platform to raise awareness in fighting racism and social injustice.

Vikings players took the field pregame Sunday with custom shirts that said “Be the Change” on the front, and listed the names of 200 people killed by systemic racism or police brutality on the back. The Vikings also honored the family of George Floyd before Sunday’s game following the performance of the song “Lift Every Voice and Sing.”

The Minnesota Vikings took a moment to honor the family of George Floyd before the game Sunday at U.S. Bank Stadium.

Also on Sunday, the Floyd family is launching the George Floyd Memorial Foundation, aimed at promoting social change, bridging the gap between the community and law enforcement, and initiating sustainable police reform.

Floyd died on May 25 while being detained by Minneapolis police officers. The launch of the foundation will follow Friday’s highly anticipated pre-trial hearing for the four officers charged in Floyd’s death.

Additionally, for the first time since they opened U.S. Bank Stadium, the Vikings did not sound the Gjallahorn pregame and held a moment of silence. It’s staying silent in memorial of Floyd’s death. The team typically sounds the Gjallarhorn prior to a pregame Skol chant.

Teams across the NFL on Sunday stood and locked arms on their fields before kickoff as Alicia Keys sang “Lift Every Voice and Sing.” The Vikings stood in their end zone, with players and coaches locking arms, while the Packers left the field and stayed in their locker room for the song.

The Sounds of Blackness performed the National Anthem, with several Vikings players taking a knee. Head coach Mike Zimmer was locked in arms with co-defensive coordinator Andre Patterson, who he considers one of his closest friends.

The Packers stayed in their locker room for the National Anthem, and quickly ran onto the field after.