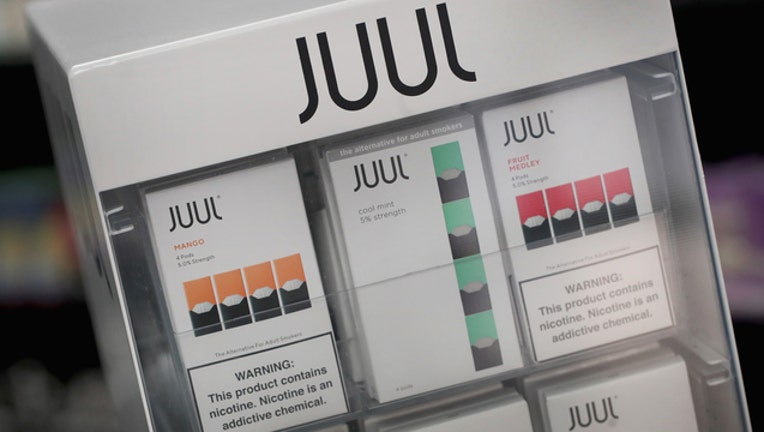 Electronic cigarettes and pods by Juul, the nation's largest maker of vaping products, are offered for sale at the Smoke Depot on September 13, 2018 in Chicago, Illinois. The Food and Drug Administration (FDA) has ordered e-cigarette product makers t (Scott Olson/Getty Images)

SAN FRANCISCO - San Franciscans appear to have overwhelmingly defeated Proposition C in Tuesday's election, meaning a citywide ban on electronic cigarette sales could go into effect next year, according to preliminary election results.

Early results show that out of 103,434 votes, more than 78 percent voted against Prop C. The proposition requires majority approval to pass.

Prop C was placed on the ballot by San Francisco-based e-cigarette maker Juul Labs earlier this year after the city's Board of Supervisors
passed legislation banning the citywide sale of electronic cigarettes pending a review by the U.S. Food and Drug Administration.

City Attorney Dennis Herrera, who actively supported the No on Prop. C campaign, said in a statement Tuesday night, "Juul is Big Tobacco, and it's using a classic ploy from the Big Tobacco playbook to try and hook another generation of kids on nicotine. Voters saw right through Juul's deception.

"San Francisco already has the toughest e-cigarette regulations in the nation. By law, e-cigarettes must undergo FDA review to ensure they are safe for public health. Complete FDA review and you can sell your product here. If you don't, you can't. It's that simple," Herrera said.

"Juul spent millions trying to mislead San Franciscans and rewrite the rules to benefit itself before realizing that was a fool's errand. It could have put that time and effort into completing the required FDA review," he said. "Perhaps FDA review is a test that Juul is afraid it can't pass."

Although Juul initially backed the Yes on Prop C campaign, in late September the company announced it would step away from actively supporting Prop C. The company said it would instead focus on working cooperatively with regulators, policymakers and stakeholders to combat underage use while providing an alternative for adult cigarette smokers.

If the measure is certified as defeated, the ban on e-cigarette sales would go into effect on Jan. 1, 2020.