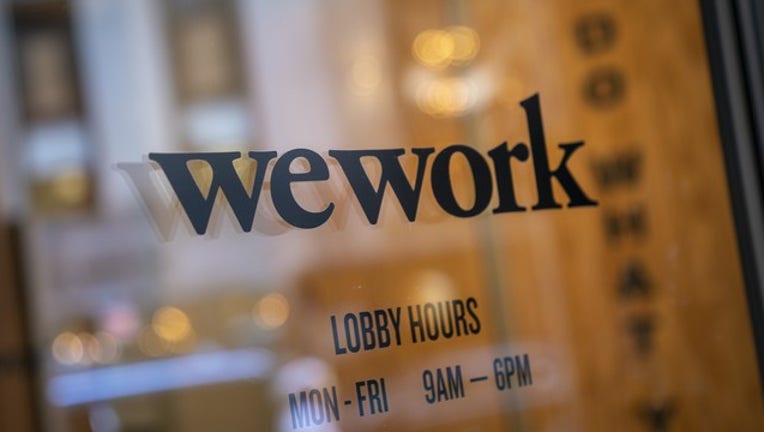 A WeWork office facility stands in the Financial District in New York City on September 13, 2019. (Photo by Drew Angerer/Getty Images)

NEW YORK (AP) - WeWork's new leaders formally suspended a planned stock market debut Monday, as they seek to repair the battered image of a company that appeared to revolutionize the office-rental industry and was poised just weeks ago to go public with a value of nearly $50 billion.

"We have decided to postpone our IPO to focus on our core business, the fundamentals of which remain strong," the company's new co-chief executive officers, Artie Minson and Sebastian Gunningham, said in a statement. "We have every intention to operate WeWork as a public company and look forward to revisiting the public equity markets in the future."

WeWork's meteoric growth and sleekly designed spaces with cool offerings like free beer and meditation classes gave it the aura of yet another tech company led by a magnetic personality.

It was initially valued at $47 billion by private investors. But the company failed to drum up that kind of enthusiasm on Wall Street after revealing massive losses in its IPO filings. WeWork's revenue rose sharply to $1.8 billion in 2018, but the company lost $1.6 billion the same year.

WeWork leases buildings and divides them into office spaces to sublet to members, which include small businesses, startups and freelancers who can't afford permanent office space. But with location operating expenses - mostly rent - amounting to some 80% of revenue, it has been heavily reliant on cash infusions from its private investors.

The scuttled IPO raises an urgent cash challenge for WeWork, which had been counting on deal that would have given it access to $6 billion in financing raised by a group of banks, contingent on the company raising at least $3 billion in the public stock offering.