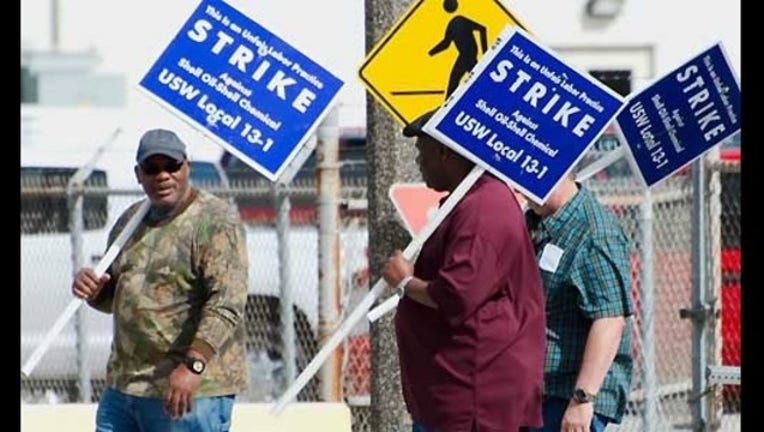 NEW YORK (AP) — Gasoline prices can spike for all kinds of reasons that make skeptical drivers roll their eyes: "tension" in the Middle East, a refinery suddenly shuts down for maintenance, or the annual springtime switch to summer blends of gasoline.

A refinery strike, however, would seem understandable. Yet three weeks into a walkout at 11 refineries around the country, the impact on the prices of gasoline, diesel and other fuels is barely discernable.

Gasoline prices have gone up this month, but mostly due to a sharp increase in the price of oil and because gas prices almost always rise at this time of year, according to Tom Kloza, chief oil analyst at the Oil Price Information Service.

If autoworkers strike, cars stop coming off the line. If teachers strike, kids don't go to school. But refineries are different. They are like giant pressure cookers, and once they are up and running they don't need all that much elbow grease to keep oil flowing in and fuels coming out.

"We can continue on running with the staffing levels that we have ... for a very long period of time," Tesoro CEO Geoff Goff told investors last week. Tesoro owns three of the refineries undergoing strikes.

The United Steelworkers union, which represents workers at 230 refineries, oil terminals, pipelines and petrochemical facilities in the U.S., called a strike February 1 after failing to come to agreement over a new contract. The union accuses the refinery operators of creating unsafe conditions by tiring out union workers with extensive overtime requirements and using more and more contract workers, who they say aren't as well-trained as USW members.

They have asked Royal Dutch Shell, which was chosen by the union to negotiate an agreement that would serve as a template for other operators, to produce information that details its use of overtime and contract work. The union expects bargaining to resume Wednesday, though a Shell spokesman would only confirm they would try to re-start negotiations sometime this week.

If negotiations break down further, the strike could spread to other refineries, and could slow U.S. output enough to scare traders into bidding gasoline prices higher. The USW covers workers that operate two-thirds of the nation's refining capacity.

In the meantime, the Shell refinery in Deer Park, Texas, along with nearly all the other refineries targeted by the union in California, Indiana, Kentucky, Ohio, Texas and Washington, are operating at near-normal levels because they have been able to line up enough managers, former employees, employees from other locations and contract workers to keep the refineries going.

Also, improved technology has made refinery operations more automated. Today's refineries are "an order of magnitude more sophisticated than they were 10 years ago," says Skip York, an analyst at Wood Mackenzie. Refinery control rooms, he said, "look like they are about to launch something to Mars."

A Tesoro refinery in Martinez, California that was running at half-speed anyway has been shut down, and output is slightly lower at the other plants, York says.

The amount of gasoline in storage is higher than average for this time of year, according to the Energy Department, which provides a buffer to any possible supply disruption. And because this is a slow time of year for refineries, they have the capacity to quickly dial up their production if prices started to rise.

"All this is mitigating the impact of the strike," York said.

The national average price of a gallon of gasoline is $2.26, according to AAA. That's 18 cents more than last month, but $1.10 cheaper than this time last year.