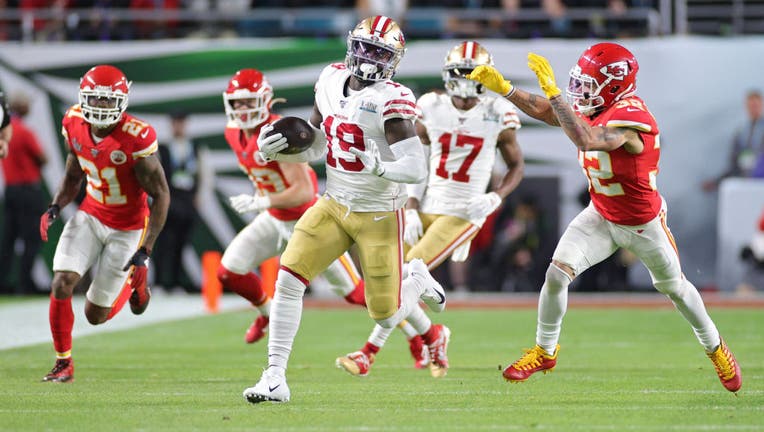 MIAMI, FLORIDA - FEBRUARY 02: Deebo Samuel #19 of the San Francisco 49ers runs the ball as he is chased by Dustin Colquitt #2 of the Kansas City Chiefs in the first quarter of Super Bowl LIV at Hard Rock Stadium on February 02, 2020 in Miami, Florida

The Niners also announced on Saturday that cornerback Jamar Taylor and linebacker Joe Walker have been elevated from the practice for Sunday night’s game against Philadelphia.

San Francisco created roster spots for Samuel and Hasty by placing edge rusher Dee Ford and tight end Jordan Reed on injured reserve. Ford missed the past two games with a bad back and there’s no prognosis for his return. Reed sprained his knee last week and is expected to miss six to eight weeks.

Samuel broke his foot during informal offseason workouts with teammates in June and missed the first three games of the season.

Samuel caught 57 passes for 802 yards and three TDs as a rookie last season and also made big contributions in the running game. He had 14 carries for 159 yards and three scores.

Hasty had two carries for 9 yards in his debut last week.