This comes after a broken foot in mid-June.

SANTA CLARA, Calif. - The San Francisco 49ers activated starting receiver Deebo Samuel from the non-football injury list as they reduced their roster to under the 53-man limit.

The move with Samuel means he is eligible to play the season opener Sept. 13 against Arizona instead of staying on the NFI list because of a broken foot for at least the first eight weeks of the season.

It’s not yet certain whether Samuel will be able to play the opener but coach Kyle Shanahan has expressed hope he’d have that key piece in Week 1. With Samuel on the active roster, the 49ers cut seventh-round receiver Jauan Jennings, as well as veteran training camp additions Kevin White and River Cracraft.

Samuel caught 57 passes for 802 yards and three TDs last season and also made big contributions in the running game. He had 14 carries for 159 yards and three scores. Samuel had 575 yards receiving over the final eight weeks of the regular season, ranking second to Tennessee’s A.J. Brown among rookies in that span. 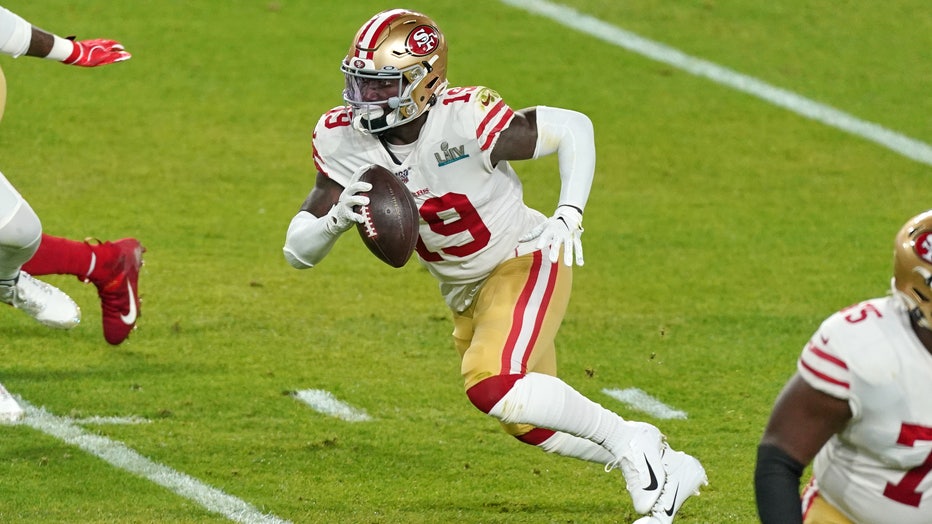 Samuel then made a big impact in the postseason with 10 catches for 127 yards and six runs for 102 yards in three games. He had five catches for 39 yards and three carries for 53 yards in San Francisco’s 31-20 loss to Kansas City in the Super Bowl.

The Niners will start the season with three players on the physically unable to perform list with center Weston Richburg, as well as defensive linemen Ronald Blair and Jullian Taylor out for at least the first eight weeks as they recover from knee injuries.

Among the other players released on Saturday include defensive end Dion Jordan, safety Johnathan Cyprien, linebacker Joe Walker and cornerback Jamar Taylor, who all were in the running for spots on the roster this summer.

The team currently has only 52 players on the roster but starting middle linebacker Fred Warner remains on the reserve/COVID-19 list and could take the 53rd spot when he is cleared to return.