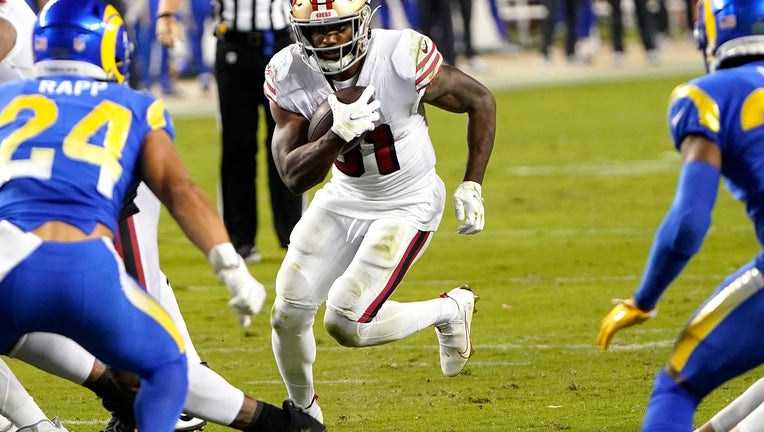 Raheem Mostert #31 of the San Francisco 49ers carries the ball against the Los Angeles Rams during the second quarter at Levi's Stadium on October 18, 2020 in Santa Clara, California. (Photo by Thearon W. Henderson/Getty Images)

Coach Kyle Shanahan said Monday that running back Raheem Mostert suffered a high ankle sprain in the team’s 24-16 win over the Los Angeles Rams and is “most likely” headed to the injured reserve list.

He exited the game in the second half after a one-yard carry and did not return. Mostert ran for 6 yards on 17 carries and caught two passes for 11 yards.

Injuries have been an unfortunate theme for the season through six weeks and this is the second time Mostert will miss games for an injury so far. The 28-year-old running back missed weeks 3 and 4 with an MCL sprain he sustained in the team’s Week 2 win against the Jets.

SEE ALSO: Enter the NFL Challenge contest on the FOX Super 6 app for free and you can win the $1M jackpot! Download by clicking here.

To replace Mostert, the 49ers will look to Jerick McKinnon and rookie JaMycal Hasty. Tevin Coleman, having been sidelined with a knee sprain he got in Week 2, is eligible to come back this week but Shanahan said it’s a “long shot.”

The offensive line suffered some setbacks in Week 6, too. Shanahan said center Ben Garland (calf) is headed to the injured reserve list later this week. Left tackle Trent Taylor will be evaluated for an ankle injury he suffered against the Rams.