HOUSTON - The Atlanta Braves are World Series Champions for the first time in nearly two decades with their 7-0 win over the Astros in Houston during Game Six on Tuesday.

Only the fourth team to go from a losing record before the All-Star break to the Fall Classic, the Braves have pulled off the near-impossible to become  World Series Champions.

The Braves were firing on all cylinders. Max Fried threw six shutout innings in the signature pitching performance of the Series. Soler, a July acquisition who tested positive for COVID-19 in the playoffs, backed him early with a monster three-run shot for his third homer against the Astros.

Freeman hit an RBI double and then punctuated the romp with a solo home run in the seventh that made it 7-0.

Max Fried rolled through six innings pitching with intense purpose and throwing his fastball more than during his previous two starts when he struggled. The left-hander had six strikeouts, no walks, and no runs off four hits in those six innings. The Braves left-hander threw 74 pitches.

Fried also is the first starter to get an out in the sixth inning of this World Series.

Fried retired 17 straight batters before Michael Brantley reached on an infield single with two outs in the sixth -- Brantley had been the last batter to reach, too, when he stepped on Fried's ankle on a close play at first in the first inning. 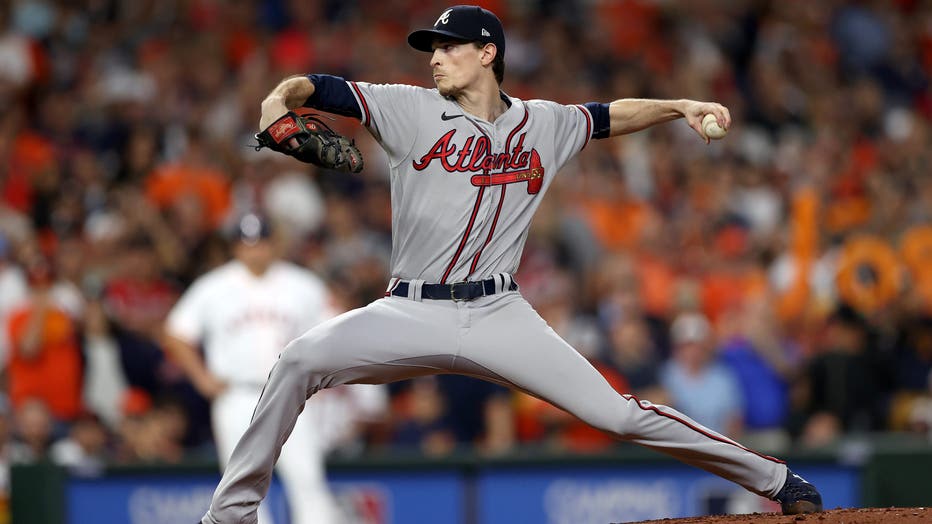 Max Fried #54 of the Atlanta Braves delivers the pitch against the Houston Astros during the first inning in Game Six of the World Series at Minute Maid Park on November 02, 2021 in Houston, Texas. (Photo by Elsa/Getty Images)

Jorge Soler's three-run blast gave the Braves a 3-0 lead in the third inning.

Ozzie Albies got Atlanta's first hit of Game 6 with a single on a grounder to right field to start the third inning.

Travis d'Arnaud hit a fly ball to center field that Jose Siri grabbed for the first out. Dansby Swanson followed with a long fly ball to left field that Michael Brantley caught on the track just in front of the wall for the second out.

Luis Garcia then walked Eddie Rosario, which prompted a visit to the mound from pitching coach Brent Strom.

There was a full count when Soler connected on his third home run of the Series to give the Braves the lead. The soaring 446-foot shot that sailed over the wall in left field brought eight of his teammates out of the dugout to celebrate as he rounded the bases.

The homer chased Garcia. Brooks Raley took over and Freddie Freeman grounded out for the third out of the inning. 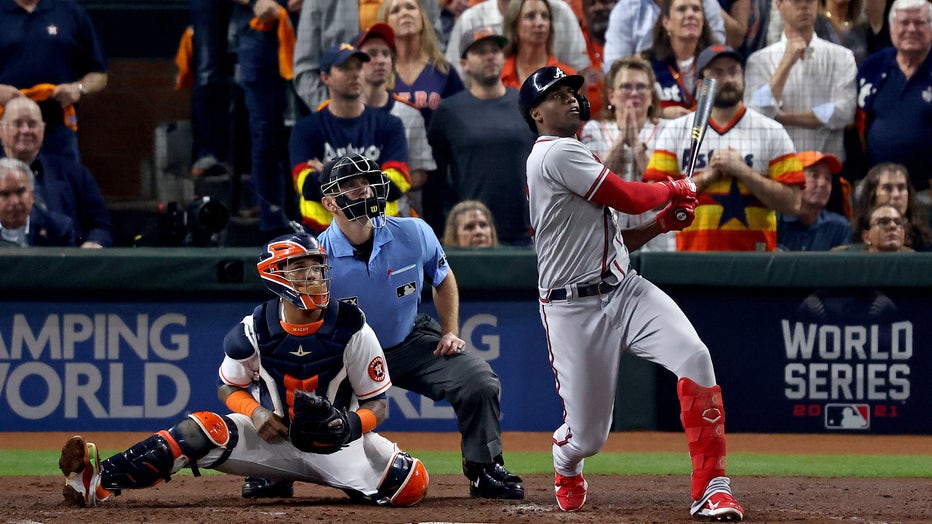 Jorge Soler #12 of the Atlanta Braves hits a three run home run against the Houston Astros during the third inning in Game Six of the World Series at Minute Maid Park on November 02, 2021 in Houston, Texas. (Photo by Tom Pennington/Getty Images)

Ozzie Albies walked to start the fifth. One out later, Swanson hit his second homer of the Series -- both off Cristian Javier -- to make it 5-0.

Swanson, the top overall pick in the 2015 amateur draft by Arizona, was the Most Outstanding Player at the 2014 College World Series as he helped Vanderbilt win a national championship. 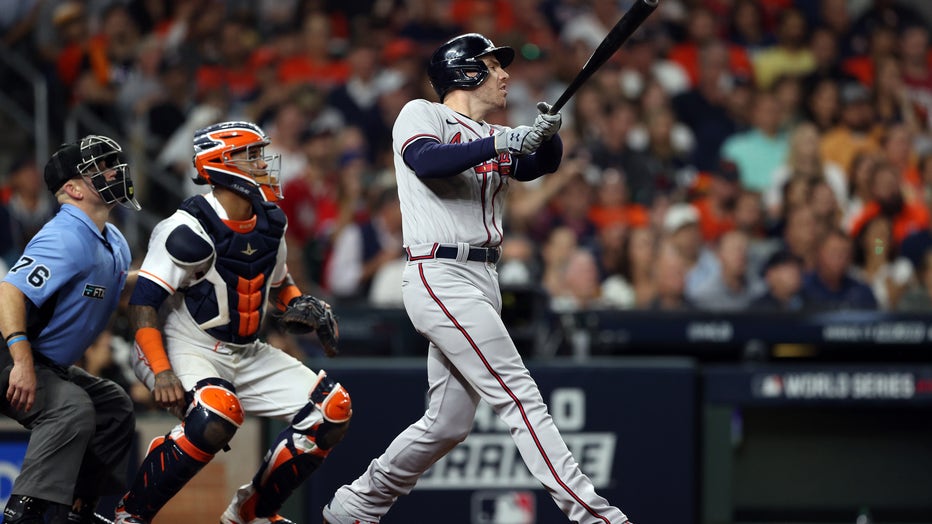 HOUSTON, TEXAS - NOVEMBER 02: Freddie Freeman #5 of the Atlanta Braves hits an RBI double against the Houston Astros during the fifth inning in Game Six of the World Series at Minute Maid Park on November 02, 2021 in Houston, Texas. (Photo by Elsa/Ge

Jorge Soler, who launched a three-run homer in the third, walked with two outs against lefty Blake Taylor and scored from first base when Freeman doubled off the left-center fence.

Freeman would come back in the 8th and hit a solo home run putting the Braves up 7-0. 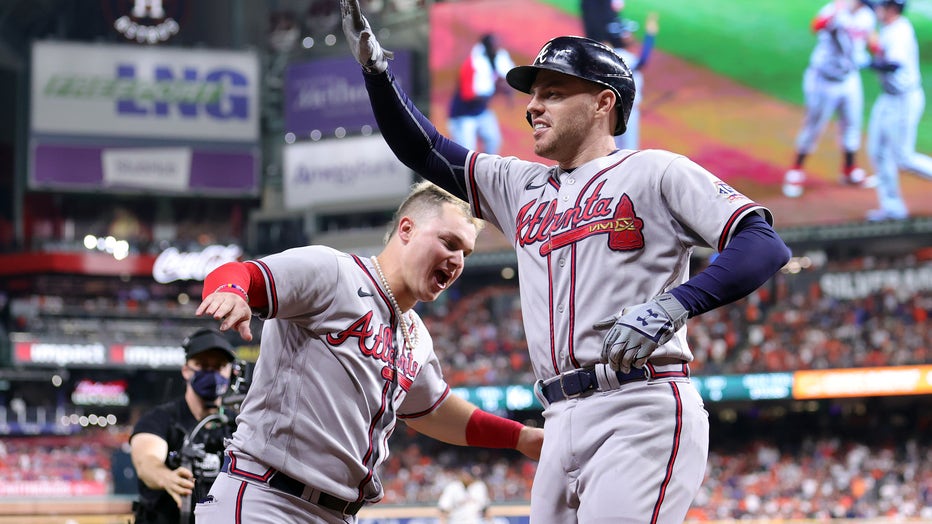 Freddie Freeman #5 of the Atlanta Braves celebrates with Joc Pederson #22 after hitting a solo home run against the Houston Astros during the seventh inning in Game Six of the World Series at Minute Maid Park on November 02, 2021 in Houston, Texas. (

By the final out, nothing could stop them.

Not a broken leg sustained by starter Charlie Morton in the World Series opener. Not a big blown lead in Game 5.

Most of the season, it just seemed this wasn’t their year.

They dropped their first four games, and soon injuries piled up. They lost their most dynamic player before the All-Star break. They were stuck below .500 in August.

Yet out of nowhere, suddenly, these Atlanta Braves transformed themselves and took off.

Jorge Soler, Freddie Freeman and the Braves breezed to their first World Series championship since 1995, hammering the Houston Astros 7-0 Tuesday night in Game 6.

How proud The Hammer himself would’ve been.

By then, it was a total team effort. Ailing star Ronald Acuña Jr., the dynamo of Atlanta’s future, bounded from the dugout to join the celebration for Freeman, the longtime face of the franchise.

A mere afterthought in the summer heat among the land of the Giants, White Sox and Dodgers, but magnificent in the Fall Classic.

Consider it a tribute to the greatest Braves player of them all, Mr. Hank Aaron. The Hall of Fame slugger died Jan. 22 at 86, still rooting for his old team, and his legacy was stamped all over this Series.

For 72-year-old Houston manager Dusty Baker, a disappointment. But for many fans still rooting against the Astros in the wake of their 2017 sign-stealing scandal, some satisfaction.

Major credit for the Braves, too, goes to general manager Alex Anthopoulos. Undaunted by Acuña’s knee injury, he pulled off a flurry of July trades that brought the Fab Four to the outfield — NL Championship Series MVP Eddie Rosario, Adam Duvall, Joc Pederson and Soler.

Fans celebrate at Truist Park and The Battery in Atlanta as the Braves win the World Series for the first time in more than two decades.

But even in the Analytics Era, guided by a GM fully versed in new-age ways, the path these Braves took wouldn’t add up in any computer. Especially with how things looked in midseason.

"At that time, we were searching," third baseman Austin Riley said before Game 6. "I think there’s no question about that."

Minus Acuña, Atlanta wasn’t over .500 for a single day until the first week in August. The Braves finished 88-73 for the 12th-best record in the majors and fewest victories among playoff teams; their win total was the lowest for a World Series champion since St. Louis’ 83 in 2006.

Plus, the agonizing history of sports in Atlanta, a city where no team had won a title in the four major pro sports besides 1995.

The Braves couldn’t convert a three games-to-one advantage over the Dodgers in the NL Championship Series last year. The Hawks fell short in the NBA Finals last season. And then there was the big one, the Falcons blowing a 28-3 lead to the Patriots in the Super Bowl.

But these Braves, not this time.

Favored in spring training to win their fourth straight NL East title, the Braves lost Acuña to a torn knee in July. Earlier, 2020 Triple Crown contender Marcell Ozuna was injured and later placed on leave while Major League Baseball investigated him under its domestic violence policy. Projected ace Mike Soroka never got back from Achilles injury.

Going into the playoffs, their bullpen was a crazy patchwork.

They had a guy who made his big league debut in October, a lefty who was pitching in 2019 for the Texas AirHogs in a now-defunct independent league and a righty who was stacking boxes at an appliance warehouse a decade ago. Toss in a rookie who was off the roster a week ago as he watched Game 1 at a hotel in suburban Atlanta.

For sure, plenty of fans around the country were rooting hard against Jose Altuve and the Houston crew. Many continue to heckle them as the "Cheatin’ Astros" for an illegal sign-stealing scheme on the way to their 2017 title, and those feelings might last forever.

Certainly a lot of people were cheering for Baker. A World Series winner as a player and a highly respected figure on and off the field, he wasn’t able to check the final box on his resume as a championship skipper.

The Braves’ crowns have been spread out over more than a century.

The 1957 Milwaukee Braves were led by Aaron in his only NL MVP season. His 44 was painted in large numbers on the outfield grass at Truist Park, and Baker and Snitker often mentioned how much he’d meant to them.

There were the 1914 Boston Braves, too, dubbed the "Miracle Braves" back in the day. In last place on the Fourth of July, they surged to win the pennant, then upset a heavily favored team — the Philadelphia A’s — to earn their nickname.

The Braves’ previous title came at Atlanta-Fulton County Stadium, their first home after moving from Milwaukee to the Deep South in 1966. Then there was Turner Field before the team uprooted from downtown and decided to sprawl into the suburbs.

Truist Park was packed and the outside plazas were jammed over the weekend, and pulsating crowds filled Minute Maid Park.

Quite a change from last October. Only a limited capacity was permitted for that World Series as the Dodgers beat Tampa Bay at a neutral-site stadium in Arlington, Texas — that followed a total shutout for fans during a regular season shortened because of the coronavirus.

Now, all of baseball waits to see whether spring training is on deck in a little over three months. A squabble between owners and players threatens soon to shut down the sport.

In the meantime, the sport can savor a year in which things, slowly, started to get back to normal.