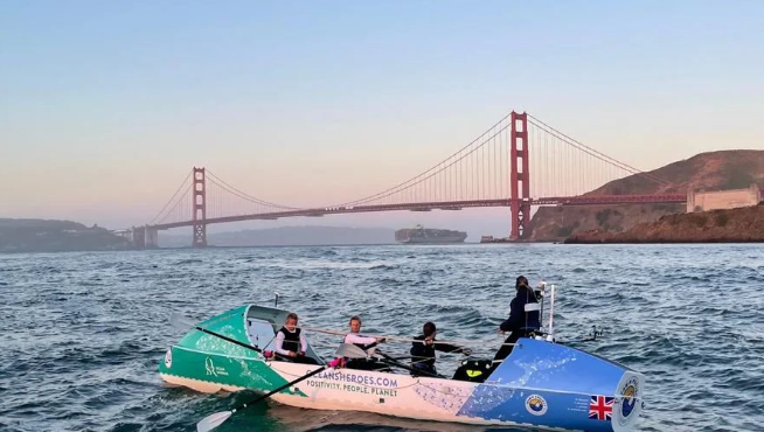 Lat35, an all-female rowing team begins their journey from San Francisco to Hawaii.

SAUSALITO, Calif. - Thirty-four days, 14 hours, and 11 minutes after leaving Sausalito, Lat35, a team of all-female rowers, arrived in Hawaii after rowing 2,400 nautical miles across the Pacific Ocean in record-breaking time.

"There were a lot of moments of uncertainty," said Brooke Downes, who's one of the rowers.

Downes, Libby Costello, Sophia Denison-Johnston, and Adrienne Smith spent the last month taking turns rowing in two-hour shifts, not getting more than 90 minutes of sleep each night. They did it in part to beat the previous 35 day, 12 hours, and 22-minute record set in 2021.

"There was a five-day period where we had no wind or a headwind, we were moving so slowly every single stroke was so hard," Downes told KTVU from her hotel room in Hawaii. "We felt really defeated it was only supposed to last about a day, but it lasted for five days."

Downes said they did a good job staying positive and encouraging each other and keeping each other entertained in the middle of the ocean.

"There were a lot of little fun surprises that you get latched onto in the middle of the ocean," said Downes. "We would say ‘Oh there’s a fly fish or shooting star.’"

The women found ways to keep in touch by documenting their journey on an Instagram page that’s since racked up over 40,000 followers.

"We used a sort of solar-powered hot spot," said Downes. "You point it at the sun, and the battery lasts for about an hour, but it's still not great service."

The women had no in-person contact with anyone other than each other for the duration of the voyage.

"The row was unsupported. We couldn't have anyone bring anything, or we wouldn't have broken the world record," said Downes.

They brought all of their own food and medical supplies and boiled their own water.

Downes says the journey was taxing in the best way.

"You see people doing these big adventure races and free soloing," said Downes. "I wondered what is it that these people have that I don't have, I wanted to find out that secret sauce. It turns out there isn’t anything secret, it’s just a desire to say yes."

Throughout their journey, the women raised over $10,000 for the Anxiety and Depression Association of America.