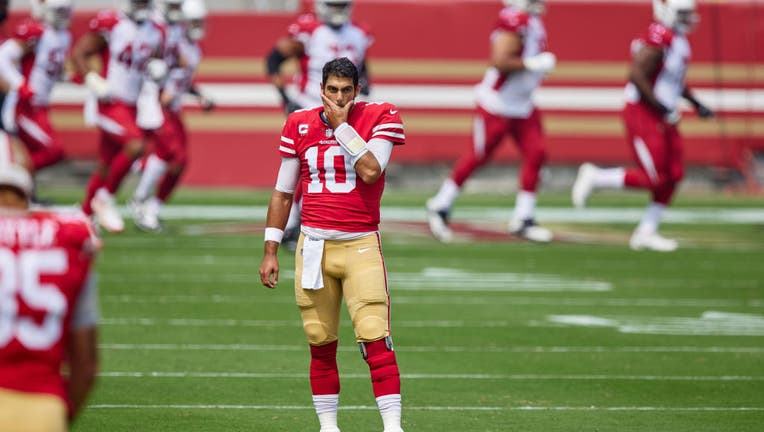 SANTA CLARA, Calif. - Jimmy Garoppolo will return as starting quarterback for the San Francisco 49ers this week after missing the past two games with a sprained ankle.

Coach Kyle Shanahan said Garoppolo will start Sunday at home against the Miami Dolphins. Shanahan wanted to see how Garoppolo made it through a full week of practice before making his decision.

“Each day he got better,” Shanahan said Friday. “Never felt too sore the next day. So, we needed to hear that today and see him out there today and we feel good to go.”

Garoppolo had hoped not to miss any time with the injury, having played through ankle sprains before. But this was a more severe high ankle sprain which made it impossible for him to move well enough to avoid danger in the pocket.

He was able to show he was healthy in practice and will provide a needed spark for the 49ers (2-2), who lost 25-20 at home last week to Philadelphia.

“Ankle is feeling really good right now,” Garoppolo said. “Got the last couple of weeks off to get it right. The training staff, I tip my hat to those guys, they did a great job with me, just preparing me and everything. But, as far as getting out there, I mean, we’ve had the whole week to work on it. So, it’s feeling pretty good right now.”

San Francisco has a 20-6 record when Garoppolo starts, compared to a 5-21 mark with any other quarterback since Shanahan arrived in 2017.

Garoppolo threw for 3,978 yards and 27 TD passes last season to lead the Niners to 13 wins and was 33 for 49 for 390 yards, four TDs and no interceptions in six quarters this season.

The Niners could have almost all of their key pieces back on offense with running back Raheem Mostert questionable after missing two games with a knee injury and receiver Deebo Samuel questionable with an illness.

Samuel hasn’t been allowed at the facility the past two days because he had a fever and aches earlier in the week. Samuel has taken part in meetings and will be allowed back once he passes one more coronavirus test.

Mostert, Samuel, All-Pro tight end George Kittle and first-round receiver Brandon Aiyuk have all missed games this season so the Niners are looking forward to the possibility of having all their important pieces available together for the first time.

“That’s exactly how we envisioned it in the offseason,” fullback Kyle Juszczyk said. “It’s great to finally have everybody healthy and in there together.”

Shanahan also said C.J. Beathard has moved ahead of Nick Mullens on the depth chart and will be Garoppolo’s backup Sunday. Mullens played well in his first start this season before getting pulled in last week’s loss to Philadelphia after committing three turnovers.

Beathard played well in relief and now will get the first shot if anything happens to Garoppolo.

NOTES: LB Dre Greenlaw will also return after missing two games with a quadriceps injury. ... CB Ahkello Witherspoon (hamstring) is questionable for the game, while DE Ezekiel Ansah (biceps), CB Dontae Johnson (groin), CB Emmanuel Moseley (concussion) and CB K’Waun Williams (knee, hip) are out. ... Ansah and Williams will be placed on IR on Saturday and the Niners will call up at least one more cornerback from the practice squad.