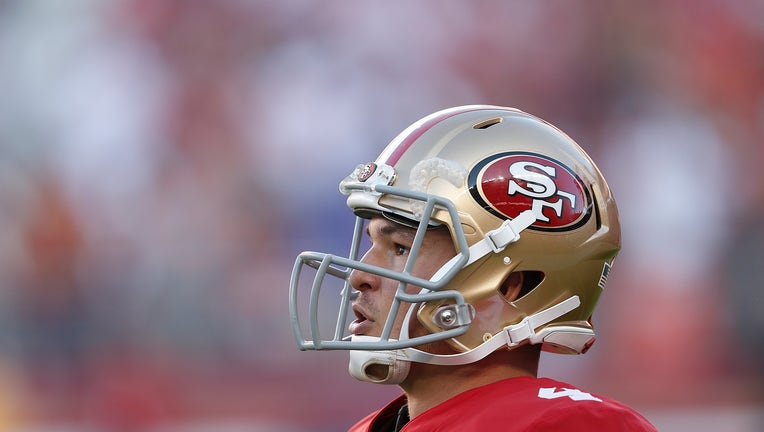 SANTA CLARA, CALIFORNIA - OCTOBER 07: Nick Mullens #4 of the San Francisco 49ers looks on before the game against the Cleveland Browns at Levi's Stadium on October 07, 2019 in Santa Clara, California. (Photo by Lachlan Cunningham/Getty Images)

Nick Mullens will start at quarterback on Sunday for the San Francisco 49ers in place of the injured Jimmy Garoppolo but won’t have All-Pro tight end George Kittle as an option.

Garoppolo didn’t practice all week because of a high ankle sprain suffered last week but wasn’t officially ruled out for this week’s game against the New York Giants until Friday.

Coach Kyle Shanahan also said Friday that Kittle will miss a second straight game after spraining his knee in the season opener. Kittle practiced on a limited basis this week but wasn’t healthy enough to go.

“I thought it was a lot safer to leave him out,” Shanahan said. “We didn’t need to wait another day because of how he sounded today.”

Garoppolo’s injury sets the stage for Mullens to make his first start for the 49ers in nearly 21 months. The former undrafted free agent from Southern Mississippi showed flashes during an eight-game stint at the end of the 2018 season after Garoppolo was sidelined with a season-ending knee injury.

Mullens won three of his eight starts for a struggling Niners team that season, completing 64.2% of his passes for 284.6 yards passing per game, with 13 TDs, 10 interceptions and a 90.8 rating. His 8.2 yards per attempt rank fourth best among the 50 quarterbacks with at least five starts the past three seasons.

He said he's spent the time since then trying to build more arm strength.

“That’s the thing everybody’s going to criticize, but it’s one thing that I’ve attacked,” he said. “Just playing with the full field, that’s huge to me and I’m excited to show that on Sunday.”

Mullens got on the field for one game last season without throwing a pass in mopup duty against Carolina. He got his first real game action of any kind since the 2019 exhibition season last week when he played the second half against the Jets.

He didn’t look sharp that game, completing 8 of 11 passes for 71 yards and an interception, while also taking two sacks. But now he will have had a full week of practice with the first-string offense that should put him in a better position.

“He’s a serious guy,” left tackle Trent Williams said. “You see him walk around the building, you wouldn’t know if was the starter or third string because he prepares every week like he was starting quarterback. There’s not a lot of joking around. You can tell that he’s serious about his craft. We’re ready to go with him. I think we definitely can win, we will win with him. He’s a heck of a quarterback, glad to have him as a backup and get ready to roll.”

The Niners expressed concern earlier in the week about returning to MetLife Stadium for a second straight week after all the injuries last week on a newly installed turf field. The NFL inspected the field again during the week and determined it was safe.

“The NFL has done everything to check it out,” Shanahan said. “It’s just another turf field. Of course, we’d rather play on grass because it is safer, but that’s not something that’s on our minds at all anymore. We were a little emotional after the game on it. I promise it’s gone and we’re ready to go. The good thing about that turf is we’ll be a lot faster on it.”

NOTES: CB Jason Verrett had a good week of practice after missing the first two games with a hamstring injury. He could get significant time with starter Richard Sherman (calf) on IR and Ahkello Witherspoon (hamstring) questionable. ... WR Deebo Samuel looked good running on the side and should return to practice next week after three weeks on IR and could play against Philadelphia.