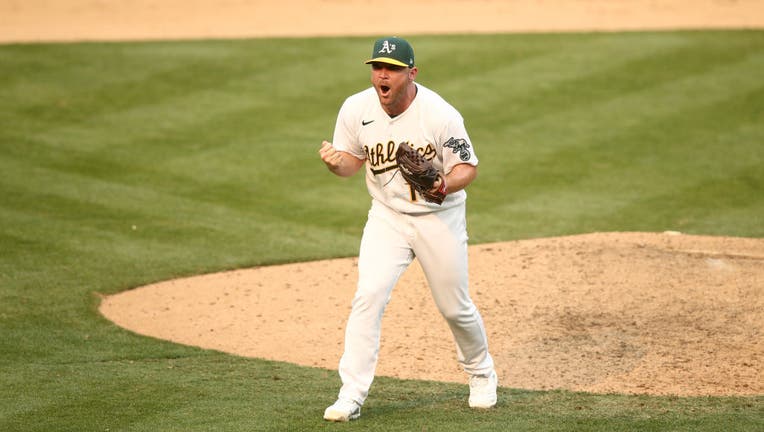 OAKLAND, CALIFORNIA - OCTOBER 01: Relief pitcher Liam Hendriks #16 of the Oakland Athletics celebrates after they beat the Chicago White Sox 6-4 in Game Three of the American League wild card series at RingCentral Coliseum on October 01, 2020 in Oakl

OAKLAND, Calif. - The Oakland Athletics ended 14 years of postseason futility, riding Chad Pinder’s go-ahead, two-run single in the fifth inning and repeated costly walks by Chicago’s relievers to rally past the White Sox 6-4 on Thursday and win the decisive third game of their AL wild-card round series.

The AL West champions lost the opener, then won on consecutive days and advanced to a Division Series against the rival Houston Astros starting Monday in Los Angeles. The winner of that matchup faces the New York Yankees or Tampa Bay for a spot in the World Series.

Sean Murphy hit a two-run homer in the fourth against Codi Heuer as wives and families cheered from suites high above the diamond.

Oakland stopped a nine-game losing streak in winner-take-all postseason games, a major league record that dated to the 1973 World Series. The A’s had lost six straight playoff series since sweeping Minnesota in the 2006 Division Series only to get swept by Detroit in the Championship Series.

And what a relief for manager Bob Melvin's slugging, happy-go-lucky A's bunch that won 97 games each of the past two seasons only to lose the division to Houston and then the AL wild card game both years.

This one was never comfortable — even after Chicago lost designated hitter Eloy Jiménez and reliever Garrett Crochet to early injuries.

Lou Trivino allowed the first two batters to reach in the seventh, hitting James McCann with a pitch. First baseman Matt Olson ran 98 feet to make a magnificent catch in foul territory for the second out, then Jake Diekman relieved and loaded the bases with a walk to Nomar Mazara before getting Adam Engel's groundout.

Opening day starter in July, Frankie Montas pitched two innings for the win. Liam Hendriks gave up McCann's leadoff single in the ninth and closed out the game, a day after failing to do so.

Hendriks retired Mazara on a called third strike to end it. The A's closer let out a howl of celebration and pumped his arms before receiving congratulatory hugs.

The low-budget A's had not captured a winner-take-all postseason game since beating Hall of Famer Willie Mays and the New York Mets. in Game 7 of the 1973 World Series. Oakland had gone 1-15 in potential clinchers since 2000.

Two relievers after Murphy's homer, Matt Foster walked Mark Canha with the bases-loaded to tie it, then Matt Olson’s walk forced in another run that gave Oakland a 4-3 lead. Mazara hit a tying single in the fifth.

Luis Robert homered leading off the second then later added an RBI single for the White Sox, who were led by top MVP candidate José Abreu to snap a string of seven consecutive losing seasons to reach the postseason for the first time since 2008. They won the AL Central that year before losing 3-1 to Tampa Bay in the Division Series.

Loser Evan Marshall walked the bases loaded with a second straight free pass with two outs in the fifth to Marcus Semien before Pinder singled.

Melvin insisted Pinder's bat would help the A's in the playoffs, even after the infielder spent a stint on the injured list down the stretch with a strained right hamstring.

Melvin also turned to right-hander Mike Fiers to take the ball over lefty starter Sean Manaea. The decision made perfect sense: The White Sox went 14-0 in the regular season against left-handed starters and beat southpaw Jesús Luzardo in Game 1 on Tuesday. That prompted Sox star Tim Anderson to say, “I guess they haven’t done their homework.”

A year ago, Melvin picked Manaea over Fiers to start the wild-card game Oakland lost to Tampa Bay after Fiers pitched his second career no-hitter against the Reds in May 2019 and went on to finish 15-4.

Fiers wanted the start that night but understood Melvin made a tough choice.

“It was a fun call for me to finally reward him,” Melvin said.

While Fiers was done after 1 2/3 innings having surrendered a run and five hits, he might get to leave his mark on the Astros series after not facing his former club all of 2020.

It was Fiers in November who made public his former Houston club’s sign-stealing scam in an article with The Athletic.

Luis Robert homered leading off the second for Chicago then later added an RBI single. He emphatically threw down his twirling bat before rounding the bases as teammates roared from the dugout.

His home run to left-center traveled 487 feet, the second-longest of the postseason and furthest by a White Sox player since 2015, according to MLB Stats.

First-pitch temperature was 84 degrees and the air quality smoky yet again given more Northern California wildfires.

“We've played in it before so at least we are experienced,” Melvin said.

The A’s reached the AL Championship Series in 2006 only to be swept by Detroit, the lone time the past 20 years and spanning 11 postseason berths Oakland advanced past the first round of the playoffs.

Before Wednesday’s 5-3 win that snapped a six-game losing streak in the playoffs, the A’s had dropped five straight postseason games when facing elimination.

Jiménez started as DH then came out with further discomfort in his sprained right foot following a leadoff double in the third.

He missed the first two games of the series and the final three of the regular season.

“We've got to get a win today. We've got to buy him some time,” Anderson said. “That's another big bat that we're missing right now.”

Crochet, who relieved fellow rookie starter Dane Dunning in the first, exited in the second with tightness in his left forearm — his throwing side.