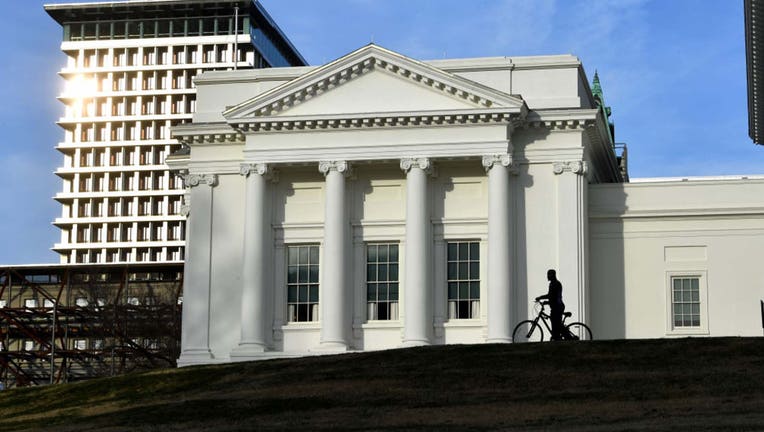 FILE - A bicyclist pauses in front of the Senate side of the Virginia State Capitol.

RICHMOND, Va. - History-making Republican Winsome Earle-Sears began her tenure presiding over the Virginia Senate on Monday as the state's first woman to serve as lieutenant governor and the first Black woman to hold statewide office.

"This indeed is an historic moment," said Sen. Mark Obenshain, who gave a speech welcoming the presiding officer who will be referred to as madam president. A standing ovation followed from members of both parties and guests in the gallery.

Earle-Sears, a former member of the state House who last year returned from a nearly 20-year absence from elected office to win election, did not give lengthy prepared remarks.

She acknowledged her husband, a daughter, a staffer and a family friend who were visiting in the gallery and tweeted that it was "a privilege to serve the people of the Commonwealth."

Earle-Sears was part of a GOP sweep of Virginia’s top offices in November. She was sworn in Saturday, along with Gov. Glenn Youngkin and Attorney Gen. Jason Miyares. The party will also enjoy a new majority in the House of Delegates, meaning Democrats' sole remaining hold on power in Richmond will be in the Senate, where their majority is a razor-thin 21-19.

Earle-Sears will cast tie-breaking votes as she oversees the procedural flow of the chamber. The lieutenant governor is also second in line to the governorship, and the part-time position is often a steppingstone to higher office.

Earle-Sears takes over the role from previous Lt. Gov. Justin Fairfax, who did not seek reelection and instead unsuccessfully ran for the Democratic nomination for governor.

A Marine veteran who immigrated to the United States from Jamaica as a child, Earle-Sears defeated Democrat Hala Ayala last year to become only the second woman in Virginia’s long history to serve in a statewide office. Attorney Gen. Mary Sue Terry, who was elected in 1985, was the first.

A staunch conservative who speaks frequently about her Christian faith, Earle-Sears has made history as a woman in politics before.

She got her start in elected office in 2001 when she stunned both parties by defeating a 10-term Democrat in an overwhelmingly blue district to become the first Black Republican woman elected to the House of Delegates.

She served just one term before deciding not to seek reelection. After moving, she unsuccessfully challenged U.S. Rep. Bobby Scott in a race The Associated Press described at the time as "a campaign of raw invective."

She went on to serve on the State Board of Education and more recently as the national chair of an organization dedicated to reelecting former President Donald Trump. She’s also led a men’s prison ministry, served as director of a women’s homeless shelter and run a plumbing and electrical supply company.

Monday marked the fourth day of this year's 60-day legislative session. Most legislation is continuing to make its way through the subcommittee and committee process. Because of the split party control of the General Assembly, lawmakers will be forced to find compromise on issues ranging from education to public safety to the state's spending plan.

Monday also marked a traditional day of advocacy at the Capitol. The Martin Luther King Jr. holiday has long offered a chance for Virginia residents, often with a day off work, to meet with lawmakers. Gun rights activists had a far more subdued presence than two years ago, when tens of thousands descended on the Capitol Square to protest Democrats' legislative agenda.