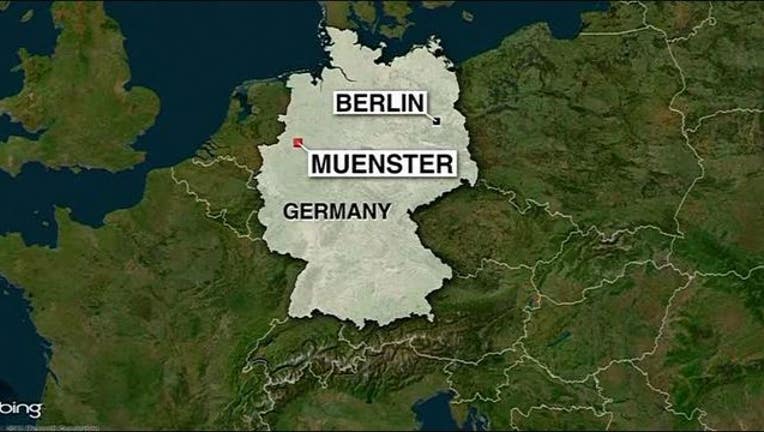 A vehicle crashed into a crowd Saturday outside a popular bar in the western German city of Muenster, killing three people and injuring 20 others.

MUENSTER, Germany (AP) -- A van crashed into people drinking outside a popular bar Saturday in the German city of Muenster, killing two people and injuring 20 others before the driver of the vehicle shot and killed himself inside it, police said.

A top German security official said there was no indication of an Islamic extremist motive but officials were investigating all possibilities in the deadly crash that took place at 3:27 p.m. on a warm spring day.

Witnesses said people ran away screaming from the city square after the crash. Police quickly set up a large cordoned-off area for their investigation and ambulances rushed to the site.

Six of the 20 injured were in severe condition, according to police spokesman Andreas Bode.

Herbert Reul, the interior minister of North Rhine-Westphalia state, where Muenster is located, said the driver of the gray van was a German citizen. He stressed that the investigation was at an early stage but said "at the moment, nothing speaks for there being any Islamist background."

"We have to wait, and we are investigating in all directions," Reul said, adding that it was clearly not an accident.

Reul said two people were killed in the crash and the driver killed himself -- lower than the earlier police toll of three dead plus the driver.

Police spokesman Peter Nuessmeyer told The Associated Press that he could not confirm German media reports that the perpetrator reportedly had psychological issues.

Bode told reporters that police were checking witness reports that other perpetrators might have fled from the van at the scene. Hours later, police spokeswoman Vanessa Arlt said "we didn't find anything (to those reports) but we're still investigating in all directions and not excluding anything."

Police tweeted that residents should "avoid the area near the Kiepenkerl pub" in the city's historic downtown area where a large-scale police operation was underway.

Police also said they found a suspicious object in the van that they were examining to see if it was dangerous. They told German news agency dpa that was the reason authorities cordoned off such a large area.

The Sueddeutsche Zeitung newspaper said the suspect's apartment was being searched Saturday night for possible explosives.

The Muenster University Hospital put out an urgent call for citizens to donate blood -- and so many people rushed to help that long lines of donors formed. Jan Schoessler, who was among those in line, said dozens of people were waiting shortly after doors opened at 7 p.m.

The university canceled the call after only an hour and thanked everyone on Twitter "for your overwhelming support."

Muenster, a major university city, has about 300,000 residents and an attractive medieval city center that was rebuilt after World War II.  TV footage showed a narrow street sealed off Saturday with red-and-white police tape. Dozens of ambulances were near the cordoned-off area and helicopters were flying overhead.

The Kiepenkerl is not only one of the city's best-known traditional pubs, but also the emblem of the city, depicting a traveling salesman with a long pipe in his mouth and a big backpack on his back.

Ugur Hur was working at a nearby cafe in downtown Muenster when the crash took place.

"I heard a loud bang, screaming. And the police arrived and everyone was sent out," he said. "A lot of people were running away screaming."

Lino Baldi, who owns an Italian restaurant near the scene of the crash, told Sky TG24 that the city center had been packed with people out enjoying a Saturday market and summer-like temperatures, which had risen to 25 degrees Celsius (77 degrees Fahrenheit) from just 12 degrees (54 degrees F) a day earlier.

German Chancellor Angela Merkel said she was "deeply shocked by the terrible events in Muenster."

"Everything conceivable is being done to investigate the crime and to support the victims and their relatives," Merkel said in a statement. "My thanks go to all the responders at the scene."