Contra Costa County District Attorney's office on Tuesday charged two people with a hate crime for defacing a Black Lives Matter mural in Martinez on July 4. Neighbors say they are surprised at this behavior.

We reported this week on the incident that was captured on video and quickly went viral. Now, Nicole Anderson, 42, and David Nelson, 53, both of Martinez, face three misdemeanor counts for their alleged actions.

District attorney's office spokesman Scott Alonso was not certain
about the nature of the relationship between Anderson and Nelson. 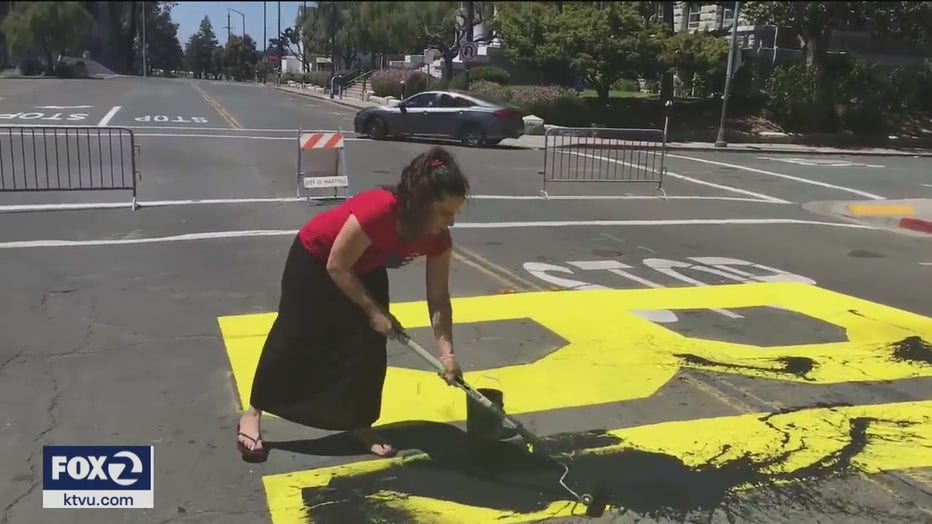 Activists with a local Black Lives Matter movement had just finished the mural when about an hour later Anderson could be seen covering it up with black paint. The D.A.'s office says Nelson, her alleged accomplice, directly aided in criminal conduct.

Justin Gomez, organizer with Martizians for Black Lives, said he obtained a city-approved permit for the mural on July 1.

“We must address the root and byproduct of systemic racism in our country. The Black Lives Matter movement is an important civil rights cause that deserves all of our attention,” stated Contra Costa County District Attorney Diana Becton. “The mural completed last weekend was a peaceful and powerful way to communicate the importance of Black lives in Contra Costa County and the country.  We must continue to elevate discussions and actually listen to one another in an effort to heal our community and country.”

Martinez Mayor Rob Schroder wrote a letter on Tuesday where he talked about recent racial tensions in the community. He addressed hateful and racist flyers that were distributed last month and threatened supporters of the Black Lives Matter movement. At the time, he told City Council hate crimes would not be tolerated.

Mayor Schroder said the city supports the BLM mural and its intended message that, "all persons, no matter their race, are entitled to be treated with equality in our society."

City crews on Tuesday cleaned up paint on the street that read, "White Lives Matter" at the intersection of Howe and Old Orchard roads. It is not clear who is responsible for that message.

The defendants in the BLM mural case are alleged to have violated civil rights and committed vandalism along with possessing tools to commit vandalism or graffiti.

Anderson and Nelson have not been arrested, Alonso said. Both will be sent notices to appear in Contra Costa County Superior Court on a date that should be set sometime Wednesday, he said.

They both face up to a year in county jail, but are exempt from a specific bail amount due to the COVID-19 pandemic, officials said.