WASHINGTON - The youngest inaugural poet in U.S. history drew rave reviews and brought some audience members to tears with her reading of "The Hill We Climb."

"Somehow we've weathered and witnessed a nation that isn’t broken but simply unfinished," 22-year-old Andrea Gorman read to an enraptured crowd, shortly after President Joe Biden and Vice President Kamala Harris were sworn in on Wednesday in Washington, D.C. "We the successors of a country and a time where a skinny Black girl descended from slaves and raised by a single mother can dream of becoming president only to find herself reciting for one."

Not bad for a young woman who told the New York Times she once had a speech impediment.

She made two Hamilton musical references in the poem, to which she tweeted Lin Manuel-Miranda.

He tweeted back to her that he caught the poetic nods when she said: "History has its eyes on us," a variation of the "Hamilton" song "History Has Its Eyes On You."

One of them was from Oprah Winfrey.

"I have never been prouder to see another young woman rise! Brava Brava," Winfrey tweeted. "Maya Angelou is cheering—and so am I."

Gorman has a special relationship with Winfrey and Angelou.

She shared that Winfrey had bought her a ring with a caged bird that she wore during the inauguration, in reference to Angelou's poem. The late Angelou, who also was an inaugural poet, was very good friends with Winfrey.

And Gorman told Vogue that Winfrey had bought Angelou her outfit when she read for President Bill Clinton in 1993.

Another was from U.S. Rep. Barbara Lee, who represents Oakland, and who took a selfie with the young woman at the Capitol. In a tweet, Lee thanked Gorman "for reminding us that there is always light and hope. Generations of phenomenal women are smiling down on you."

Regular people were in awe, too.

"Thank you fellow poet we rise at the highest levels and your poem demonstrates this," one person tweeted.

"Absolutely stole the show!" another person wrote. "This is the memorable moment of this #Inauguration." 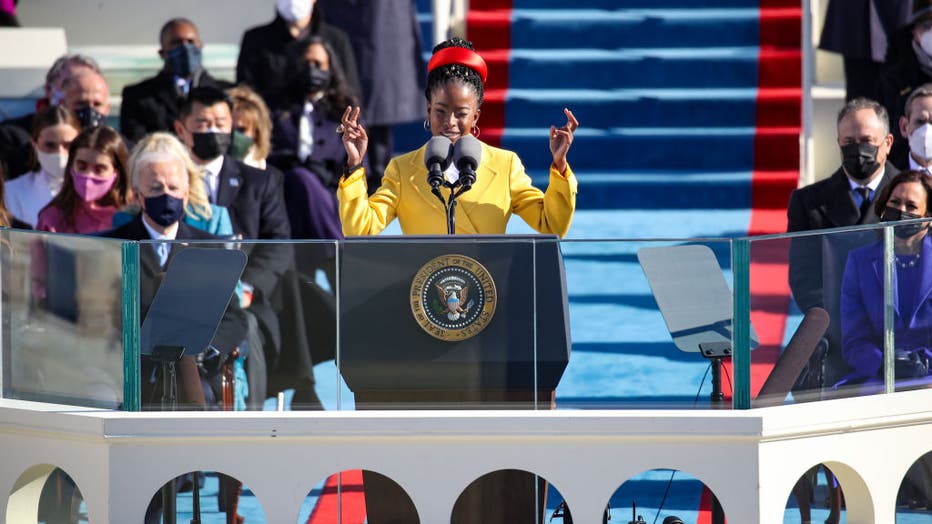 Last week, Gorman said she was not given specific instructions on what to write, but was encouraged to emphasize unity and hope over "denigrating anyone" or declaring "ding, dong, the witch is dead" over the departure of President Donald Trump.

The siege last week of the U.S. Capitol by Trump supporters seeking to overturn the election was a challenge for keeping a positive tone, but also an inspiration.

Gorman said she had been given 5 minutes to read, and before what she described during an interview as "the Confederate insurrection" of Jan. 6 she had only written about 3 1-2 minutes worth.

While the inauguration was her biggest stage, the Los Angeles resident has written for everything from a July 4 celebration featuring the Boston Pops Orchestra to the inauguration at Harvard University, her alma mater, of school president Larry Bacow.

She has appeared on MTV; written a tribute to Black athletes for Nike; and has a two-book deal with Viking Children’s Books. The first work, the picture book "Change Sings," comes out later this year.

Gorman says she was contacted late last month by the Biden inaugural committee. She has known numerous public figures, including former Secretary of State Hillary Rodham Clinton and former first lady Michelle Obama, but said the inauguration is the first time she will meet the Bidens.

The Bidens, apparently, have been aware of her: Gorman says the inaugural officials told her she had been recommended by the incoming first lady, Jill Biden.

In other writings, Gorman has honored her Black ancestors, acknowledged and reveled in her own vulnerability ("Glorious in my fragmentation," she has written) and confronted social issues. Her poem "In This Place (An American Lyric)," written for the 2017 inaugural reading of U.S. Poet Laureate Tracy K. Smith, condemns the racist march in Charlottesville, Virginia ( "tiki torches string a ring of flame") and holds up her art form as a force for democracy:

Gorman has rare status as a poet, and has dreams of other ceremonies.

She would love to read at the 2028 Olympics, scheduled to be held in Los Angeles, and in 2037 wouldn’t mind finding herself in an even more special position at the presidential inauguration — as the new chief executive.