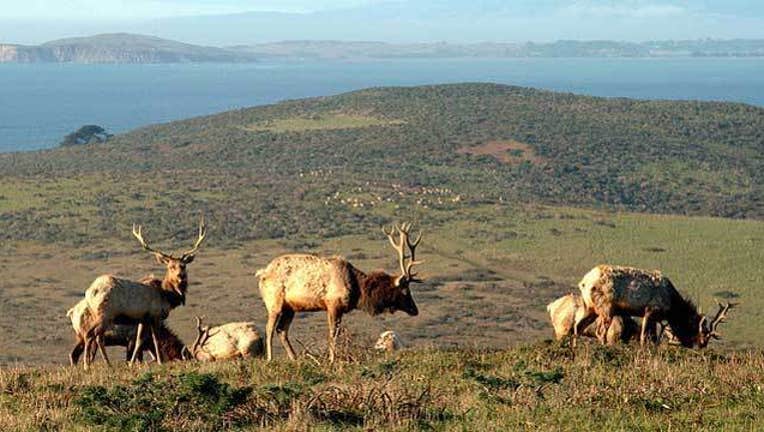 POINT REYES, Calif. (KTVU) -- Some 250 tule elk died off  over the course of two years at Point Reyes' famed tule elk preserve that overlooks the Pacific and Tomales Bay.

Point Reyes is only National Park in the United States that has tule elk. From 2012 to 2014, 250 elk died, almost half the herd inside a fenced-off area of the preserve. In that same time period, the population of the free roaming elk outside the fence increased by a third.

The Center for Biological Diversity blames the fencing and the drought for reducing the heard from 540 to 286.

"It's very likely that all of those elk died of thirst during the drought because there are no natural water sources where they're penned in," said environmental advocate Jeff Miller of the Center for Biological Diversity.

Part of the complexity of the problem is that when the elk preserve was created, a deal was made to erect a fence to keep the elk away from the cattle.

"Our enabling legislation specifically called for the continuation of beef ranching and dairy operations within the park," said a National Park Service ecologist David Press.

There are 28 cattle grazing leases, some of which are in the hands of ranchers who sold their properties to the Park Service, but still allow them to graze their cattle at steeply discounted, far below market value rates.

"Part of the reason is because they're expected to accommodate wildlife," said Miller.

In the late 1990's, the Park Service placed some elk outside the fence. Everything was working out until the free roaming elk -- which have access to streams, ponds and springs -- started going onto the ranches to graze. Some of the ranchers are now calling for all the elk to be fenced out of their leased land, moved elsewhere in the state, sterilized or shot.

"Elk have been grazing in Point Reyes peninsula for 10,000 years, except for about a hundred years in the late 1800's when they were eliminated partially because of cattle ranching and because of hunting," said Miller.

All of this will come to a head later this year when the Park Services releases its forward looking management plan for the ranches and the elk, at which time the public can he determine the outcome.