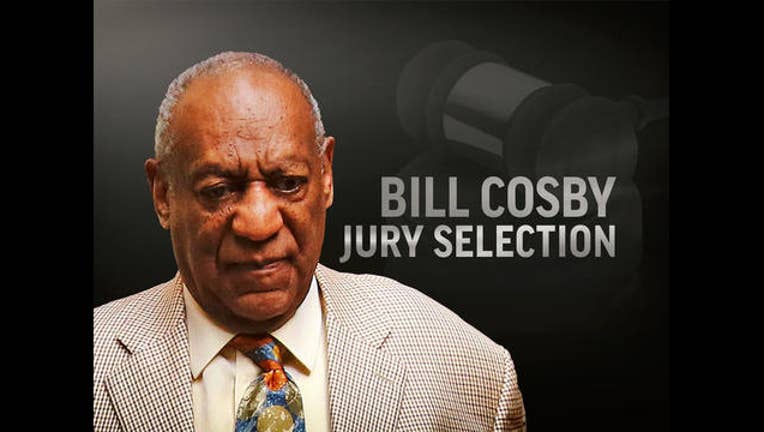 PITTSBURGH (AP) -- The panel that will decide Bill Cosby's fate in his sex assault trial began to take shape Monday with the selection of five jurors, three white men and two white women.

Two of the men say they or someone close to them has been a sexual assault victim, but both say they can be fair.

The search for 12 jurors and six alternates was expected to take several days. Experts believe lawyers on both sides will be considering race, sex, age, occupation and interests of potential jurors.

The actor-comedian once known as America's Dad for his portrayal of Dr. Cliff Huxtable on "The Cosby Show" is charged with drugging and molesting a Temple University women's basketball team manager at his home near Philadelphia in 2004. He calls their encounter consensual.

Dozens of other women have also made similar accusations against Cosby, and the judge is allowing only one of them to testify at the June 5 trial in suburban Philadelphia. The jury from Pittsburgh will be sequestered nearly 300 miles from home.

Cosby has said he thinks race "could be" a motivating factor in the accusations lodged against him.

The jurors' names, ages and occupations were being kept private from reporters. Two of the jurors selected Monday appear to be in their 50s, while one man appears to be in his 20s or early 30s.

Two men say they or someone close to them has been sexually assaulted, but they insisted they could set that aside to fairly judge the case.

One-third of the potential jurors questioned Monday said they've formed opinions about Cosby's guilt or innocence, while the majority said it would be difficult to spend several weeks sequestered across the state. And 35 of the 100 people questioned said they or a family member or close friend has been the victim of a sexual assault.

The case against Cosby has attracted worldwide publicity that the judge hopes to shield from jurors during the trial.

Cosby, who entered the courtroom on the arm of an aide, using a cane and carrying a box of tissues, conferred with his three lawyers at the defense table.

Lead lawyer Brian McMonagle had earlier said he hoped an unbiased jury could be found fairly quickly. He said Cosby was "looking forward" to getting the process started. Cosby has said he does not expect to testify.

The defense had used four strikes to keep someone off the jury by Monday afternoon, while the prosecution had not used any. Each side can strike seven people from the jury and three alternates.

The trial will take place in Norristown in Montgomery County, where Cosby had invited Andrea Constand to his home in 2004. She said she went seeking career advice as she considered leaving her job managing the women's basketball team at Temple University. She said Cosby gave her wine and pills that put her in a stupor before molesting her on his couch.

Constand was 30 and dating a woman at the time, while Cosby was 66 and long married to wife Camille. Cosby in sworn testimony has said he put his hand down Constand's pants, but said she did not protest.

The Associated Press doesn't typically identify people who say they are the victims of sexual assault unless they come forward, as Constand has done.

The judge plans to bring 100 potential jurors to the courthouse each day this week until a panel is selected. The first group consisted of 53 women and 47 men, with 16 people of color.

Cosby was arrested Dec. 30, 2015, days before the 12-year statute of limitations expired. He has pleaded not guilty and remains free on $1 million bail.

He told a talk show host last week that he hopes to beat back the charges and resume his career.

"I want people to understand my work as an artist and a performer," he said. "I want to get back to the laughter and the enjoyment of things that I've written and things that I perform on stage."