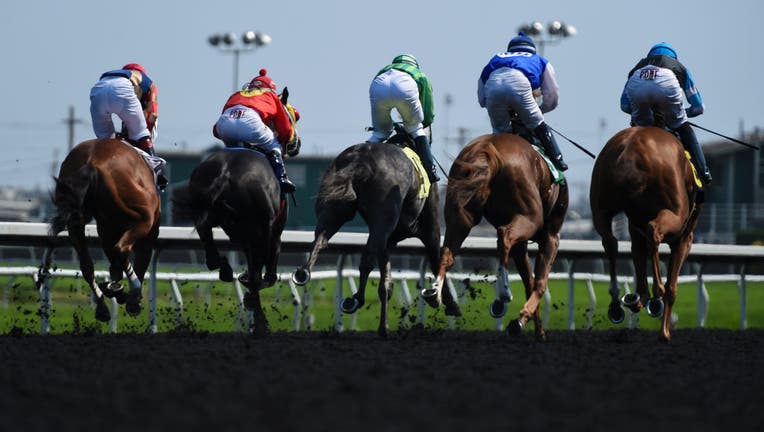 BERKELEY, CA - SEPTEMBER 2: A general view of the start of the 3rd Race during Summer Races at Golden Gate Fields on Sunday September 2, 2018 in Berkeley, California. (Photo by Cody Glenn/Getty Images)

ALBANY, Calif. - A filly died Thursday at Golden Gate Fields in Berkeley, the second this year, according to the California Horse Racing Board.

Munny, nearly 3 years old, likely died from a gastrointestinal or neurological disease, according to a board report and website that discloses the deaths to the public.

"It is unusual for a young horse to pass away, and they are dying at concerning rates at Golden Gate Fields, whether they are training, racing or in the stable," said Berkeley veterinarian Dr. Crystal Heath.

By this time last year, three racehorses had died at Golden Gate Fields. In 2020, 27 horses died at the track.

Both Staredown and Munny were trained by Blaine Wright, who is licensed with the state horse racing board.

The board issued a report following the deaths of 23 horses at Santa Anita Park in Southern California over three months in early 2019. The deaths gained widespread media attention.

The report details an investigation into each of the deaths.

The report can be read at http://www.chrb.ca.gov/veterinary_reports/CHRB-Santa-Anita-Fatalities-Report-3-10-20.pdf.

"This problem is wider than one trainer or one track," says Almira Tanner, lead organizer of the Berkeley-based animal rights group Direct Action Everywhere. "The entire horse racing industry puts profit above the lives of the animals and workers."

Tanner added, "This poor horse's name says it all."

Wright has earned nearly $16 million in his career, according to Equibase, which provides horse racing statistics.

Todd and Shawn Hansen were the owners of Munny, according to Equibase. The pair has won more than $1.8 million in racing since 2004.

Albany Mayor Ge'Nell Gary was asked whether someone needs to investigate the deaths at the track.

"The California Horse Racing Board has exclusive authority to regulate the operations of horse racing facilities and we encourage any concerns to be directly raised with the Board," she said.

She also said while she has compassion for animals and "their well-being. Although it truly breaks my heart, again I have no authority over" the track's operations.

Two attempts Friday afternoon to reach Trainer Blaine Wright were unsuccessful. A spokesperson for Golden Gate Fields did not immediately respond to an email seeking comment.