Firefighters arrived to the scene of burning pallets, tires and cars at a San Jose auto-body shop on Tuesday afternoon. KTVU's Azenith Smith reports the blaze was mostly under control by 5 p.m.

SAN JOSE, Calif. - Firefighters have controlled a four-alarm inferno burning Tuesday at an auto repair shop on the 1700 block of South 10th Street in San Jose.

No injuries have been reported to firefighters or civilians. The first call came in at 2:34 p.m.

As of 4:30 p.m., firefighters said the blaze is "significantly under control."  When they arrived, firefighters found pallets, tires and cars on fire.

Smoke from the fire could be seen for miles when the blaze began, but by 5 p.m. it had all but dissipated.

Wind was a factor in the fire. As a result nearby businesses were forced to evacuate. The fire was contained to one lot.

"With the body shops, they have all sorts of paints and thinners and other potentially flammable items. This is really now isolated to the outside yard," said Capt. Brad Cloutier with San Jose Fire Department.

"At first, it was pretty small and I thought people would have been able to contain it, but then it just started getting bigger and bigger, because of the pallets in the back. They're all made of wood," said Jun Carillo. "There were some small explostions to it, so it just made it worse."

The fire department said the fire never made it inside the building and was contained to the the lot and a small fire that was extinguished on the roof of the building.

The fire started outside the building, but the cause is unknown. Firefighters plan to stay at the scene for several hours to interview witnesses and assess damage. Surrounding streets are expected to be blocked for several hours. 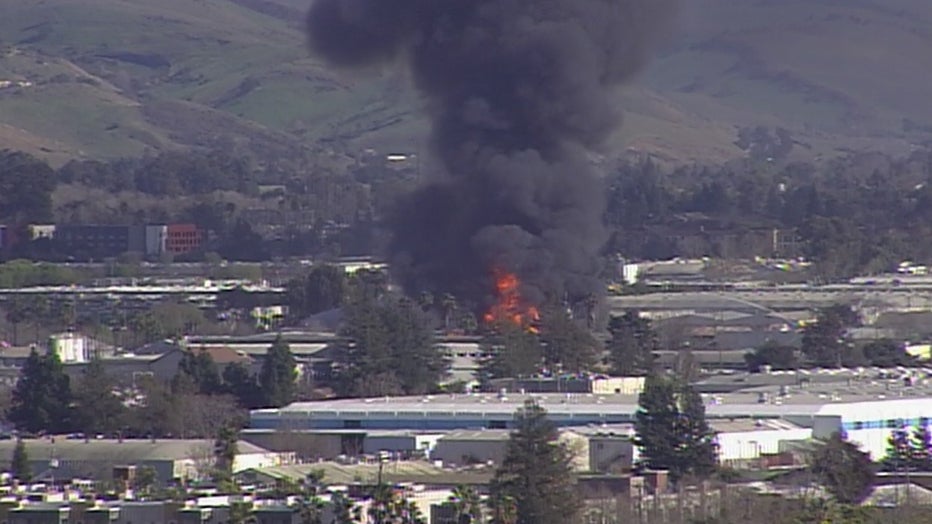