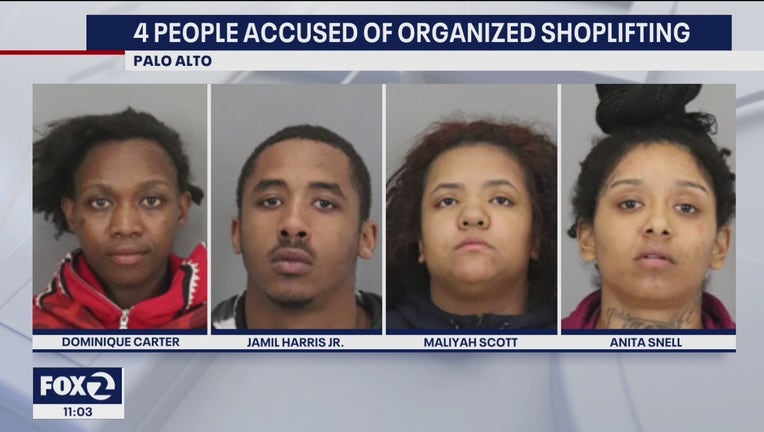 PALO ALTO, Calif. - Police in Palo Alto have arrested four people on Friday suspected of organized retail theft and a hit-and-run collision, a spokesperson for the department said.

The police dispatch center received a call at approximately 2:07 p.m. from the lululemon store at 432 University Ave. The caller reported a clothing theft and said that the suspects fled in a BMW X5 sport utility vehicle. As officers were heading to the scene, another call came in reporting a collision hit-and-run on Homer Avenue and Cowper Street, where the description of the vehicle was similar to that of the robbery. No one was hurt in the collision.

The lululemon investigation revealed that two women and one man entered the store, grabbed several items of merchandise, and fled in a vehicle without paying. Lululemon staff jotted down the license plate of the vehicle and provided it to the police.

As the vehicle made its way southbound on Cowper Street, it ran the stop sign at the intersection with Homer Avenue and struck a westbound Toyota pickup truck driven by a man in his 20s. The suspect vehicle did not stop and fled the scene. Both vehicles sustained minor damage.

Officers located the suspect vehicle traveling eastbound on Highway 92 in Foster City on the San Mateo-Hayward Bridge. The vehicle was stopped in the 27000 block of Industrial Avenue in Hayward and five occupants of the car were taken into custody without incident at about 2:43 p.m.

Officers retrieved the allegedly stolen property of 54 lululemon items valued at $5,800 which they said were inside the vehicle.