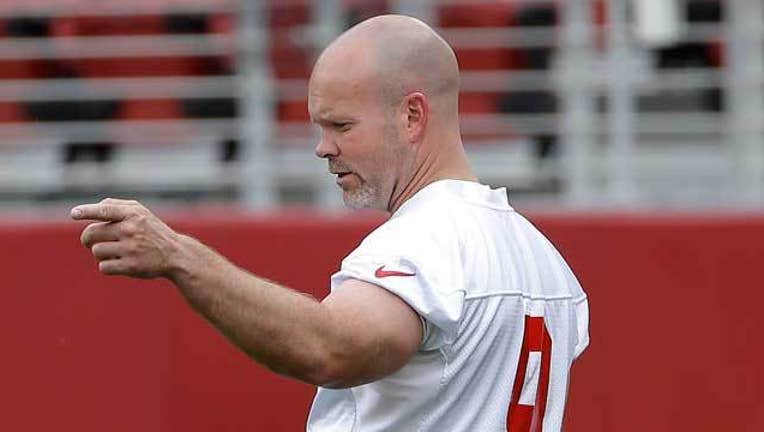 SANTA CLARA, Calif. (KTVU-AP) — The gray in his goatee is getting much more noticeable. Yet 49ers kicker Phil Dawson isn't yet thinking about retirement, even at a time when many of his San Francisco teammates have done just that.

Dawson, who turned 40 in January, is more concerned about getting comfortable with a new holder than he is about life after the NFL.

"Not one second," Dawson said when asked if he contemplated stepping away. "When I signed this deal two years ago, I expected to perform at an elite level for the term and then some. I'm more encouraged now that I can do that than I was two years ago when I signed it. Feel better, feel stronger. I expect big things."

That's an encouraging sign for San Francisco, which heads into the 2015 season with a revamped offense minus some of its key components from a year ago.

With so many new pieces in place, it could take some time for the 49ers to get rolling on offense. That will likely put more pressure on the team's kicking game.

It's an adjustment Dawson has had to make several times previously in his career and he doesn't believe it will be a big issue.

"I've been through it before so it's certainly not insurmountable," Dawson said. "But it is a big part of the process. When you consider from snap to kick is 1.3 seconds, there needs to be a level of comfort with how everyone works.

"Every holder holds the ball a little different, just their body posture. But it's not insurmountable. It's going to require a lot of hard work and I'm looking forward to the challenge."

The two specialists have been working on their timing this week during the 49ers' three-day mandatory minicamp at Levi's Stadium.

Rain fell throughout the day Wednesday, however, forcing the duo to adjust their routine.

Dawson, who has made 57 of 67 field goal attempts since signing with the 49ers in 2013, is also adjusting to the NFL rule for extra points.

Owners voted this offseason to move PATs back to the 15-yard line, creating a 33-yard kick attempt that will be longer than some field goals.

Dawson, who hasn't missed an extra point since 2009 and has whiffed on just eight in his career, is eager to test the new rule.

"Any rule change designed to highlight what kickers do well is a good thing for football," Dawson said. "In certain situations it could make a difference. That's just far enough where if something goes a little bit wrong it could bite you."

NOTES: An NFL rule prohibiting rookies from practicing until their college class graduates is preventing first-round draft pick Arik Armstead from taking part in the minicamp. The 15th overall pick in the draft, Armstead can rejoin his team Friday — one day after the minicamp ends. ... Defensive lineman Glenn Dorsey, primarily a nose tackle throughout his career, is taking reps at defensive end.