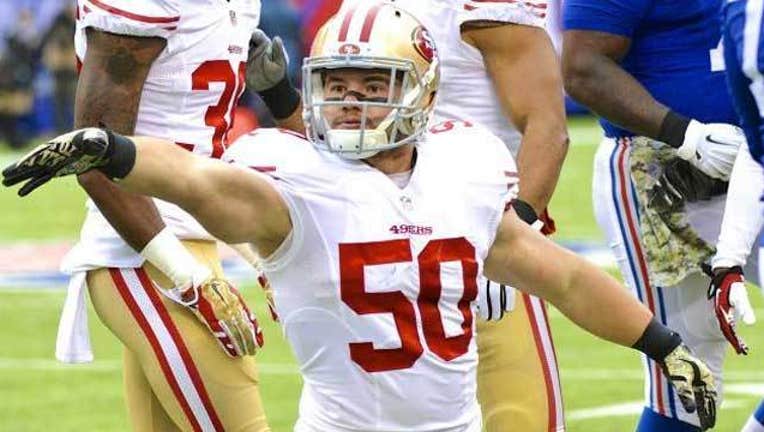 SAN FRANCISCO (AP) — Wary of head trauma, San Francisco 49ers linebacker Chris Borland is leaving football. And not even the promise of NFL stardom and piles of money could change his mind.

So now, after one stellar rookie season, he is retiring at age 24.

The 49ers announced his decision Monday night, without offering specifics. But Borland told ESPN's "Outside the Lines" earlier in the day he wants to do "what's best for my health."

Borland had a team-leading 108 tackles as a rookie, emerging as a punishing defender. He also had a sack and two interceptions.

"From what I've researched and what I've experienced, I don't think it's worth the risk," Borland said in the interview. "I feel largely the same, as sharp as I've ever been. For me, it's wanting to be proactive. I'm concerned that if you wait till you have symptoms, it's too late."

49ers general manager Trent Baalke said the team was surprised by his move and called Borland a "consummate professional."

Borland's big announcement comes less than a week after five-time All Pro linebacker Patrick Willis walked away from football. Borland replaced Willis in the starting lineup after his October toe injury required surgery.

The dual retirements are big blows to a team that has also lost coach Jim Harbaugh and defensive coordinator Vic Fangio after the season, then watched Frank Gore, Mike Iupati, Chris Culliver and Perrish Cox depart in free agency this past week. Defensive line coach Jim Tomsula was promoted to head coach following an 8-8 season, the club's first time out of the playoffs in four years.

"While unexpected, we certainly respect Chris' decision," Baalke said. "From speaking with Chris, it was evident that he had put a great deal of thought into this decision. He was a consummate professional from day one and a very well-respected member of our team and community.

"Chris is a determined young man that overcame long odds in his journey to the NFL and we are confident he will use the same approach to become very successful in his future endeavors. We will always consider him a 49er and wish him all the best."

The NFC Defensive Rookie of the Month for November, Borland injured an ankle on the final play of the first half against the Seahawks on Dec. 14 and didn't play again last season.

The 49ers selected Borland in the third round of the draft out of Wisconsin, where he was an imposing pass rusher.