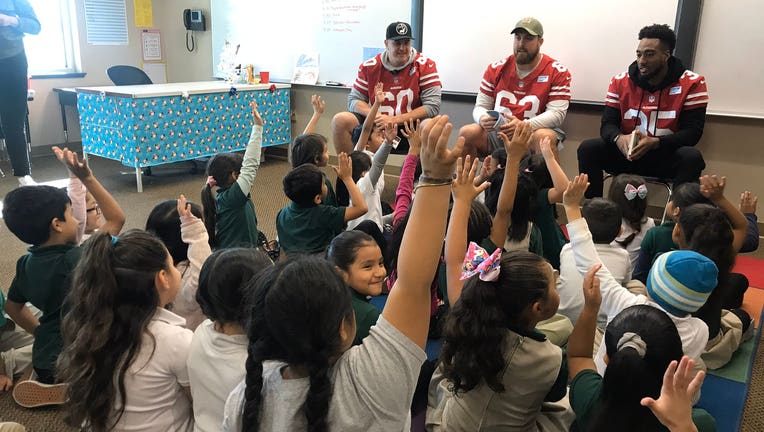 A team representative says the second playoff game to be held at Levi's Stadium is on pace to beat the attendance record set Saturday, when the team beat the Minnesota Vikings in the first-ever playoff game at the arena.

This comes the same day some 49ers players spent time off the field helping some South Bay elementary school students.

"Both my sisters are teachers so I just love promoting educational systems and to be able to be a part of this community with the team being here is awesome," said 49ers offensive lineman Daniel Brunskill.

The professional athletes also read stories to about 30 kindergartners and talked about persistence and dreams.

"The reason this is so important is because there's actually a literacy crisis in our country. Only 36% of students are reading at grade level by the end of 3rd grade," said Aarika Riddle, the Executive Director of Reading Partners.

The school event comes a few days before one of the biggest games in these players' careers.
49ers center Ben Garland says he was 5-years-old when he first dreamed of going to the Super Bowl.

"Some things you dream about since you were a little kid...we all felt that same way when we were kids. Now to be in this moment is really exciting," said Garland.

49ers fans are excited as well.

At the sports gear shop Sports Fever in Campbell, Joe Gonzales from Sunnyvale was looking to buy some 49ers gear.
He paid about $400 for two tickets to Sunday's game and plans to take his 11-year-old daughter to the NFC Championship game.

"She's a huge fan. George Kittle is her favorite player. She has his number. She's just super excited. Every time she sees him she goes, 'Kittle! Kittle!' It's just awesome," said Gonzales.

Meanwhile Allison Nedham from Saratoga was looking to buy a new 49ers jersey.
She isn't just proud of how far the team has come since last year, but also excited for the 49ers head coach whom she went to school with at Saratoga High.

"I went to high school with Kyle Shanahan, so it's kind of fun seeing him succeed," said Nedham.

While the 49ers players hope to see the students at San Antonio Elementary succeed as well.