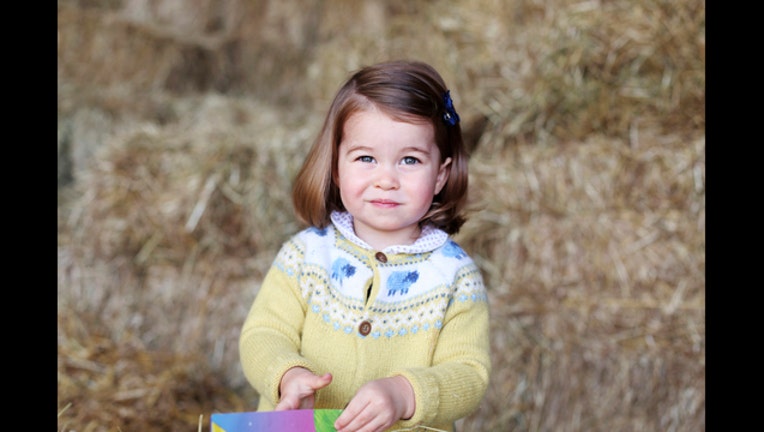 Her parents marked the occasion Monday by distributing a snapshot of Charlotte taken by her mother, the Duchess of Cambridge. Here are five things to know about the family as the landmark nears:

WHY HAVEN'T WE SEEN MORE OF PRINCESS CHARLOTTE?

Prince William and his wife, Kate, want to protect their daughter's privacy. It's not surprising that Kate took the official photo to mark Charlotte's second birthday on the protected grounds of the family's country estate. The royal couple has tried to keep Charlotte mostly out of the limelight and away from the paparazzi that often follow senior royals at events in London. An important exception was an official trip to Canada in the fall. William and Kate brought Charlotte and her older brother, Prince George, on the trip and Charlotte even attended a children's party.

WHAT DOES THE PHOTO SHOW? WHAT IMPACT WILL IT HAVE?

Don't be surprised if there's a run on fluffy yellow cardigans with cute sheep decorations in British stores catering to kids — that's what Charlotte is wearing in the official photo. It's possible the outfit was chosen by the clothes-conscious Kate, who snapped the photo. Earlier outfits worn by Prince George in public have become extremely popular with British consumers charmed by the young royals.

Charlotte looks very proper and very British, with her hair styled by a clip and her blue-grey eyes looking directly at the camera at the outdoors photo session in April.

WHAT IS THE BIRTHDAY GIRL'S FULL NAME?

She is officially named Charlotte Elizabeth Diana, in tribute to her late grandmother Diana, Princess of Wales, and her great-grandmother, Queen Elizabeth II. She is also known as Princess Charlotte of Cambridge.

WHAT'S NEXT FOR CHARLOTTE AND HER FAMILY?

The family is expected to spend more time in London and less in the countryside as William takes up more royal duties and Prince George, 3, prepares to start school in the fall. Their London base is at Kensington Palace.

WILL SHE EVER BE QUEEN?

Charlotte is fourth in line for the throne, behind Prince Charles (her grandfather), Prince William and Prince George.