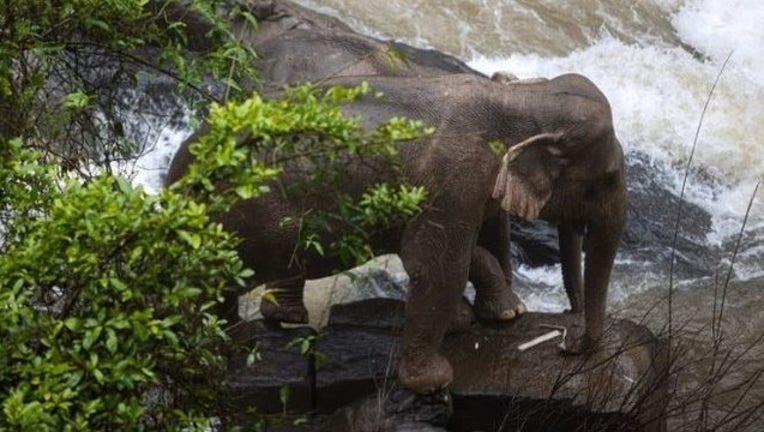 Two elephants became trapped on a small cliff after at least six drowned from tumbling down a waterfall at a Thai national park. ( Photo by PANUPONG CHANGCHAI/THAI NEWS PIX/AFP via Getty Images)

BANGKOK - A herd of wild elephants was swept away by raging waters in a national park in Thailand, drowning six, while rangers helped steer two of the animals out of a deep ravine.

Staff at Khao Yai National Park discovered the two struggling elephants and the carcasses after dawn Saturday near the Haew Narok waterfall, also known as the Ravine of Hell.

The two elephants were trying to reach a dead calf, park officials said.

Park rangers helped lead the two elephants from the ravine and said they will monitor their condition throughout the week. The waterfall was closed off to visitors while officials remove the carcasses.

"The two elephants right now are taking a rest. They are exhausted from trying to cross the stream," said Chanaya Kanchanasaka, a veterinarian at the park, located 120 kilometers (74 miles) northeast of Bangkok.

The ravines usually fill up with gushing water during the rainy season. In 1992, eight elephants died after falling into the water.

The park is home to about 300 wild elephants and is part of Dong Phayayen-Khao Yai Forest Complex, a UNESCO World Heritage site.