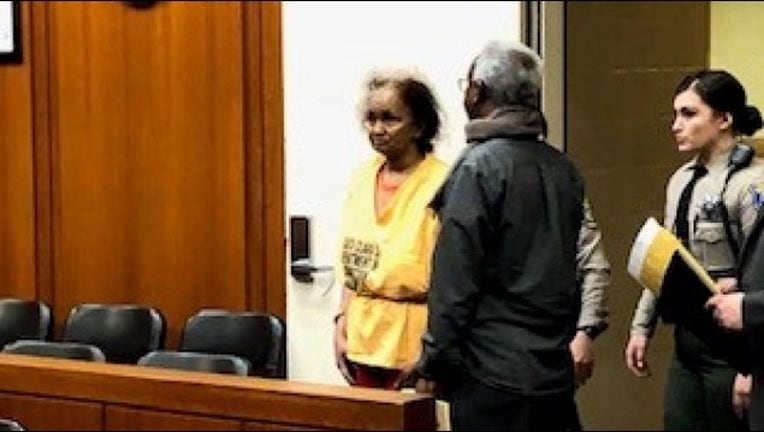 Foos Hashi, 70, is accused of strangling her 3-year-old grandson in Milpitas on Monday.

Foos Hashi did not enter a plea, and has been charged with three counts of first-degree murder, assault on a child 8 years or younger resulting in death and child endangerment.

She is being represented by the Public Defender's office and faces 25 years to life in prison if convicted, according to Deputy District Attorney Luis Ramos. Family members packed the court for her appearance Friday but declined to comment on the case.

Officers responded to a house in the 700 block of Luz Del Sol Loop at 4:44 p.m. Monday and found 3-year-old Ayub Hassan unresponsive, purple and pale. He was taken to Santa Clara Valley Medical Center and died about an hour later.

Hassan's aunt had been caring for the boy while his mother was living in Minnesota, according to court documents, and the boy had been ill and taking medicine for the last week.

His aunt left him alone with Hashi on Monday while she picked up her five children from school in San Jose. When she returned, she asked her 14-year-old son to check on the boy.

He immediately told Hassan's aunt that something was wrong with him, court documents said. The aunt found the boy unresponsive and called 911.

Hassan, Hashi and a four-year-old girl were the only people at the home when the boy was killed, according to prosecutors. During an interview with police Wednesday, the 4-year-old girl demonstrated to detectives that Hashi allegedly grabbed Hassan by the neck, shook him and threw him to the ground.

Medical personnel at the hospital found scratches on Hassan's neck that appeared suspicious and the county medical examiner's autopsy later confirmed he had died of manual strangulation.

The county Department of Family and Children's Services took the 4-year-old girl and her four siblings into protective custody. It is unclear whether the family had been reunited as of Friday.

Hashi was arrested Wednesday evening in San Jose in connection with the slaying.

"The unthinkable has happened to a family in our community," Ramos said outside the courthouse Friday. "There's nothing that we can do to bring him back, but we're gonna do everything that we can to make sure that the person responsible is held accountable."

Hashi is a Milpitas resident and the boy's paternal grandmother, according to police. She is currently being held in Santa Clara County Jail without bail and her next court date is set for May 8.