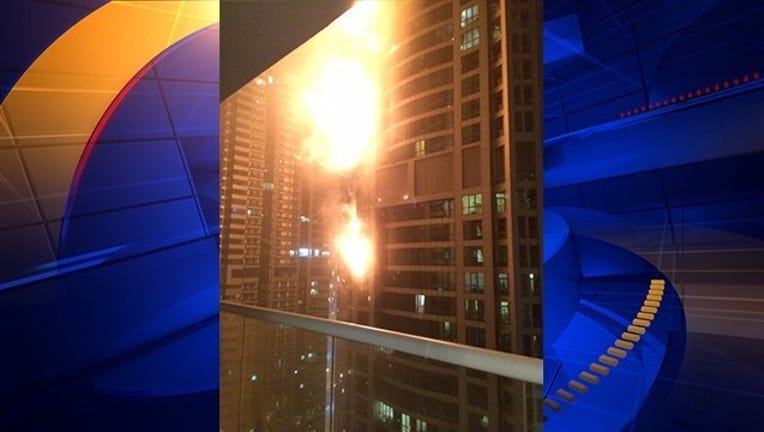 The fire broke out at about 2 a.m. in the 86-story Torch tower on the northeast end of the densely populated district, which is packed with multi-story skyscrapers. High winds whipped through the area and debris from the fire cluttered nearby streets after the blaze appeared to be extinguished.

The civil defense officials, who spoke on condition of anonymity, said there were no reports of deaths or injuries.

The cause of the fire was not immediately clear.

The Marina area is home to dozens of towering apartment blocks and hotels, many of them built over the past decade. The apartments are popular with Dubai's large number of expatriate professionals.

Police blocked off areas around the Torch, which still had power. Lights were on in many of the apartments inside and multiple fire trucks and police vehicles were on the scene.

Residents of at least one neighboring tower were told to evacuate as a precaution because of strong winds, but they were later allowed back inside.

Two residents of the Torch said they were told the fire started around the 52nd floor. Flaming material falling from the initial fire then set a lower part of the building ablaze, they said.

One of the residents, Steve Short, 53, of Liverpool, England, praised the work of firefighters who arrived quickly. He said fire alarms alerted residents to the blaze and building management sent workers knocking on doors to ensure residents got out.

Resident R.J. Morlock, 33, of Houston, shot video on his phone that showed bright yellow flames reaching what appeared to be several stories on two separate parts of the building. He said residents were nervous coming out but fire crews were able to bring the situation under control.

"I was really surprised they got it under control pretty quickly," he said. "It looked like it was going to go up."

As daylight broke, residents waiting across the street to be allowed back home were able to see the extent of the blaze: External cladding on the corner of more than two dozen stories from roughly the 50th floor to the top were mangled and charred black.

Cleanup crews dressed in orange uniforms swept up pieces of shattered glass and other debris covering the street outside the building.

The Torch opened in 2011 and is one of the world's tallest residential towers, according to developer Select Group.