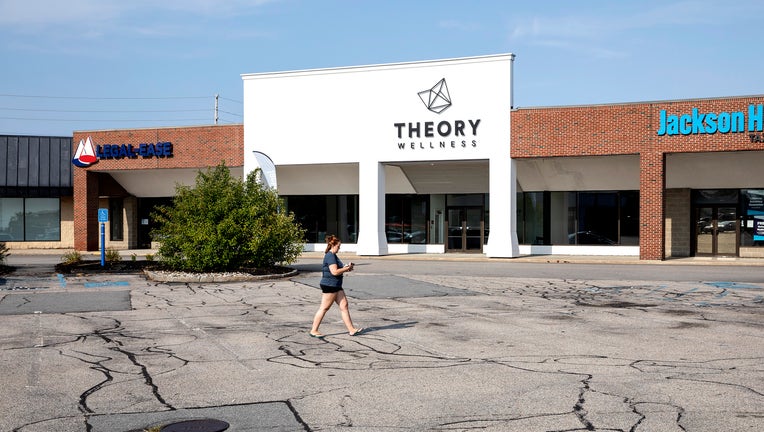 SOUTH PORTLAND, ME - SEPTEMBER 8: A woman walks through the parking lot of a the strip mall where Theory Wellness store front is in South Portland near the Maine Mall on Tuesday, September 8, 2020. Theory Wellness of Maine LLC is one of only two recr

SOUTH PORTLAND, Maine - Mainers got their first opportunity to legally buy marijuana for recreational use, but a supply shortage was a potential buzzkill.

Retailers blame the pandemic and a limited number of licensed manufacturers for reducing the variety of products available on Friday. Licenses were issued only a month ago, causing retailers to scramble to stock their shelves.

“This is a big day,” Ben Bolstridge, of Lewiston, said after making his purchases. “It's the first time in Maine history that you can actually buy recreational marijuana. That's awesome. I wanted to be here today.”

Maine’s road to becoming the 10th state allowing the retail sale of marijuana for recreational use was exceptionally arduous.

A referendum was approved nearly four years ago, in November 2016, but the effort to set up a method for legally purchasing cannabis dragged on through two legislative rewrites, two vetoes by the former governor and a change in administrations, said Erik Gundersen, director of the Maine Office of Marijuana Policy.

Once things got rolling, the coronavirus pandemic created further delays as the state determined how to safely open stores, he said.

Under state law, marijuana growers and product suppliers have to be licensed, and the products have to be certified by a state-licensed lab. For now, there are only a handful of manufacturers, and one laboratory.

Another store was licensed this week, bringing the total to eight. But only six of them were open Friday, a state official said.

That’s a bit of a disappointment for advocates. But it’s better than nothing and it represents a starting point, said David Boyer, an independent marijuana industry consultant in Maine.

“To the state’s credit, there’s something to be said for planting a flag and breaking the ice and starting sales for thousands of adults who don’t have access for one reason or another. It’s a big day,” he said.

State law allows each customer to buy up to 2.5 ounces (70 grams) of cannabis, enough to roll more than 100 joints. Included within that limit, customers may also purchase 5 grams (0.18 ounces) of concentrate.

Many retailers, however, were limiting customers to smaller purchases to stretch their supply.

Co-founder Brandon Pollock from Theory Wellness, which has cannabis stores in South Portland and Waterville, agreed that supply is limited for the moment but said he’s pleased vendors are out of the “purgatory” after years of delays.

“It’s only going to get better from here. We should all appreciate that we have a legal access point, and we’re doing the best we can to get as much products on the shelves as quickly as possible,” said Pollock.

A line of customers formed outside his South Portland store before it opened.

At the front of the line was Jason Chavez, of Portland, who said he wanted to buy as much pot as possible. “I'm a major pothead, as they say,” he added.

There is no supply shortage for people buying medical marijuana. That market is long established in Maine, and medical marijuana caregivers and eight dispensaries accounted for more than $111 million in sales last year.

All told, about 87,000 Mainers hold medical marijuana cards, allowing them to make legal purchases from caregivers and dispensaries.

Maine becomes the second state in New England with stores selling marijuana for recreational use. The first stores opened in Massachusetts in November 2018.

Retail sales could start in Vermont in two years after the governor announced this week that he’d let a bill setting up a system for the sale of cannabis become law without his signature.