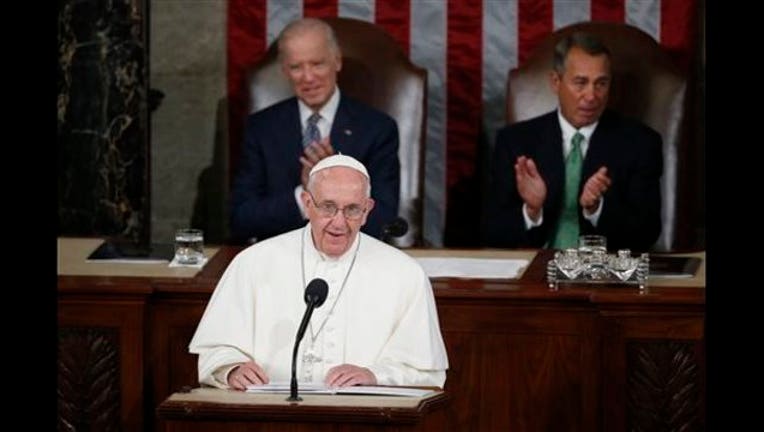 Pope Francis addresses a joint meeting of Congress on Capitol Hill in Washington, Thursday, Sept. 24, 2015, making history as the first pontiff to do so. (AP Photo/Carolyn Kaster)

NEW YORK (AP) — Pope Francis plunged into the melting pot of New York after reminding the country of its immigrant origins in the first papal speech before Congress on Thursday.

Over an intense 40 hours that started with an evening prayer service at St. Patrick's Cathedral, where he gave a deeply meaningful thank you to America's nuns, he will address world leaders at the United Nations, participate in an interfaith service at the Sept. 11 memorial museum at ground zero and celebrate Mass at Madison Square Garden.

The pope, who's making his first trip to the United States, also planned to visit a school on Friday and take a processional drive through Central Park.

The popular pontiff received a raucous welcome on his first visit to New York. Thousands of people lined the streets leading to St. Patrick's to greet him, cheering, waving flags and adoringly chanting his name as he gestured toward them from his popemobile.

On the steps of the recently spruced up cathedral, dignitaries including Gov. Andrew Cuomo, Mayor Bill de Blasio and U.S. Sen. Charles Schumer welcomed him. Later, inside, nuns in the pews erupted in applause when he thanked them for their service.

The pope opened his visit to New York by expressing his solidarity with Muslims following a Mecca pilgrimage stampede in Saudi Arabia in which more than 700 people were killed. He offered a prayer for the victims from the St. Patrick's altar.

"In this moment of prayer, I unite myself with you all in prayer to God, our father, the all-powerful and merciful," he said.

In Washington earlier Thursday, the pope had waded into bitter disputes while speaking to Congress, entreating the nation to share its immense wealth with those less fortunate. He urged Congress and the nation to abolish the death penalty, fight global warming and embrace immigrants. Lawmakers gave rousing ovations to the leader of the world's Catholics despite obvious disagreements over some of his pleas.

After he addressed Congress, the first pontiff to do so, he underscored his message by traveling to a downtown Washington church, where he mingled with needy and homeless people, blessed their noontime meal and walked among them while they ate.

Soon after, he headed by plane to New York, second stop on his three-city first visit to the U.S. He addresses the U.N. on Friday and wraps up his visit this weekend in Philadelphia, where he speaks in front of Independence Hall and celebrates Mass on the Benjamin Franklin Parkway.

At the Capitol, the remarkable sight of the pope speaking in the House chamber seemed to delight lawmakers of all persuasions, though he offered an agenda more to Democrats' liking. Besides his focus on climate change and immigration, he denounced arms sales and seemed to allude approvingly to the Iran nuclear deal and recent actions by President Barack Obama's administration to open relations with Cuba, done with his urging.

Republicans, too, heard something to like in his references to the sanctity of life and family relations, reminders that even the more open Catholic Church over which Francis presides still condemns abortion and gay marriage.

For all the spectacle, it seemed unlikely the pope's visit would break congressional inertia on the issues dear to him, with no action in sight from the Republican majority on global warming or immigration.

But Francis, in his historic speech, seemed determined to remind the United States of its foundations as a country made up of foreigners, addressing the chamber and the American people beyond in personal terms as a son of immigrants to "this great continent."

"We must resolve now to live as nobly and as justly as possible as we educate new generations not to turn their back on our neighbors and everything around us," he said. "We must not be taken aback by their numbers but rather view them as persons, seeing their faces and listening to their stories, trying to respond as best we can to their situation."

After the address, Francis appeared high on a Capitol balcony and addressed a cheering crowd of thousands below on the lawn and the Mall beyond who had watched his speech on giant TV screens.

"Buenos dias," he called out in the language of his native Argentina and millions of U.S. immigrants, legal and not.

The crowd thundered its response.

Francis asked the crowd to pray for him, as he always does. But speaking in Spanish, he added a line to acknowledge that not everyone there was a believer.

"If among you there are some who don't believe or who cannot pray, I ask that you send good wishes my way," he said, to tumultuous applause.

"God bless America!" he concluded, as he had in the House chamber.

After leaving the Capitol, the pope brought encouragement to a much smaller group: a gathering of homeless and needy people at St. Patrick's Church and Catholic Charities in Washington. He decried a lack of housing for the poor and declared there is "no justification whatsoever" for homelessness.

The pope's jam-packed tour began last weekend in Cuba and included a White House ceremony and Washington parade in his popemobile on Wednesday.

On Friday, at the United Nations, the pope is sure to make many of the points emphasized in Washington — a need for openness to immigrants and for the world to share its riches with the needy.

At the Capitol in Washington, the packed House chamber included Supreme Court justices, Cabinet officials and lawmakers of both major political parties, some of whom bowed their heads in deference as Francis walked down the center aisle to approach the dais where presidents deliver their State of the Union speeches.

"Mr. Speaker, the pope of the Holy See," bellowed the sergeant at arms.

Behind the pope sat Democratic Vice President Joe Biden and Republican House Speaker John Boehner, the first and second in line to the presidency, both Catholics.

Francis, in deliberate and accented English, noted that many lawmakers descended from immigrants and the U.S. was founded by foreigners "who came to this land to pursue their dream of building a future in freedom."

"Let us treat others with the same passion and compassion with which we want to be treated," he said. "Let us seek for others the same possibilities which we seek for ourselves."

His appeal comes amid the worst refugee crisis since World War II: Europe has been overwhelmed by hundreds of thousands of people fleeing war in Syria and Iraq, and there are widespread conflicts and poverty in Africa.

In the U.S., tens of thousands of families and unaccompanied minors from Central America have surged across the southern U.S. border as violence has flared at home.

For now, Congress has deadlocked on immigration legislation, and the chances for progress have only grown more remote amid the hardline rhetoric of the U.S. presidential campaign. Republican front-runner Donald Trump, who watched the pope's New York motorcade from the Trump Tower balcony, has painted Mexican immigrants as criminals and has said he would build a wall along the border and force Mexico to pay for it.

Francis has called for a more welcoming attitude toward migrants across the board and has backed that up with a modest welcome of his own: The Vatican recently took in two refugee families and has committed to care for them while they await their asylum applications.

On another contentious subject, he advocated abolition of the death penalty in the U.S., something that enjoys support from a number of lawmakers of both parties at the federal level. He spoke out against fundamentalism of all kinds while urging care in combating it.

In calling for action on the climate and to combat poverty, he took care to insist he was not anti-business, as some conservatives have suggested. He quoted a Catholic teaching document that calls business "a noble vocation, directed to producing wealth and improving the world."

At the Capitol, his mention of climate change drew standing cheers from Democrats while Republicans stood to applaud the reference to opposing abortion. Republicans in particular also loudly applauded as Francis asserted the importance of family life and bemoaned that "fundamental relationships are being called into question as is the very basis of marriage and the family." The Catholic Church opposes gay marriage, recently legalized by the Supreme Court.