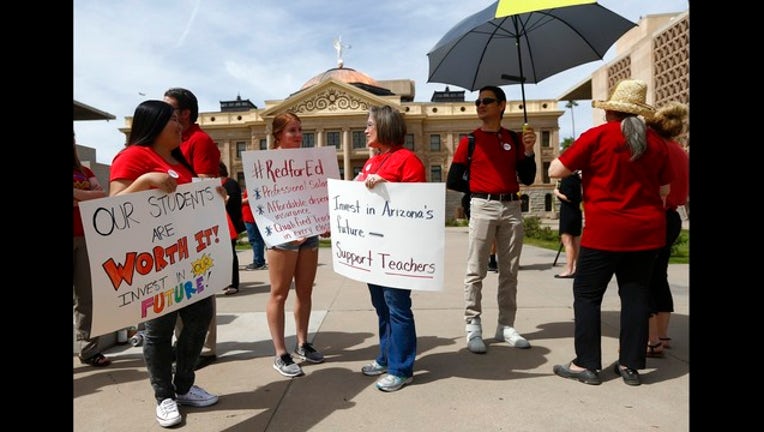 PHOENIX (AP) - After weeks of protests by teachers, Arizona Gov. Doug Ducey rolled out a proposal Thursday promising a net 20 percent raise by 2020.

"It's a good day for teachers in Arizona," Ducey said to open a press briefing. Teachers did not immediately react to the proposal.

Thursday's announcement came after more than a month of protests at the state Capitol and at schools across Arizona that were fueled by teacher discontent in West Virginia and Oklahoma.

The developments come after a group formed in March called Arizona Educators United has signed up more than 40,000 teachers and educators and threatened a walkout

Arizona teachers are among the lowest paid in the nation. According to the federal Bureau of Labor Statistics, Arizona elementary teachers earned a median wage of $43,280 in 2017 and high school teachers $46,470, the 3rd and 6th lowest in the nation, respectively. Adjusted for local cost of living, federal figures show elementary teachers actually rank 49th in earnings and high school teachers 48th.

In addition to the pay bump, Arizona educators were also seeking increased pay for support professionals, a permanent raise structure, and a freeze on corporate tax cuts until per-pupil spending reaches the national average.

The proposal rolled out by the Republican governor Thursday doesn't increase funding for other school needs or provide raises for school staff as a grassroots teachers group demanded.

Teachers and others held "walk-ins" at more than 1,000 schools Wednesday to draw attention to their demands and Arizona Educators United said earlier this week that a strike date could be set soon.

Earlier Thursday, a proposal emerged in the Arizona House.

House Speaker J.D. Mesnard outlined a plan Thursday to boost teacher pay by 6 percent in the coming school year with annual increases that could lead to a 23 percent increase at the end of five years. However, the proposal does it by redirecting cash already committed or planned for school districts in coming years, so school districts would feel the squeeze.

"We put out there a way to make sure that money that we have that we want to allocate in the coming years specifically goes to teachers," Mesnard said. "It's hundreds of millions of dollars. By 2023 I think you're at $800 million a year."

The money comes by redirecting $400 million in cuts Ducey promised to restore to school districts over four years, requiring schools to use annual mandatory inflation boosts to give teachers pay raises and using money freed up once school construction bonds are repaid in 2021. That money was already committed to teacher pay.

"Any proposal that wants to increase teacher salaries by 20 percent but does not want to put any more money into the school funding is leading Arizona schools and charter schools down a road to disaster," said Chuck Essigs, director of government relations for the Arizona Association of School Business Officials.

That's because taking an existing funding stream would further erode the ability to replace textbooks, school buses, computers to make repairs to facilities.